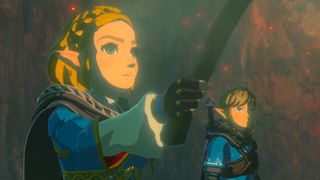 The first thing we saw of the Zelda: Breath of the Wild sequel was Link and Zelda exploring a very dungeon-esque subterranean ruin, and some new job postings from Nintendo further hint that dungeons will be a much bigger deal this time around. The company recently shared Japanese listings for terrain designer and level designer contract positions, both of which mention dungeons.

The listings are mostly composed of standard information such as preferred experience and potential compensation. However, the descriptions of the jobs themselves give us a little more insight into the Zelda: Breath of the Wild sequel.

The terrain designer position will work on parts of the game "such as field dungeons", and the level designer will work on "game event / dungeon / field planning." The latter position will also help with work on creating and tweaking enemies, in case you were worried that the sequel wouldn't expand on The Legend of Zelda: Breath of the Wild's relatively limited cast of enemies.

Breath of the Wild did have proper dungeons in the form of the Divine Beasts, but they were optional and not the height of Zelda dungeon design. The many shrines studded across Hyrule offered novel combat and puzzles, but in much shorter bursts than the sprawling dungeons of more classical Zeldas. That terrain designer position in particular makes it clear that Nintendo is planning to build more full-on dungeons into the game that are accessed from the field/open-world. Plus, they'll have new terrain, so they won't just be a rehash of places you already explored in Breath of the Wild.

Nintendo's doing its best to keep us in suspense for details, but we do know that Zelda: Breath of the Wild sequel DLC is a strong possibility. Heck, the whole concept for the game got started because Nintendo just had too many ideas to fit into DLC for the original.