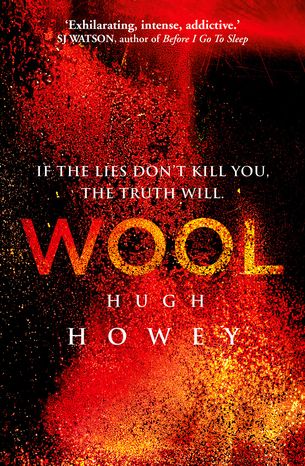 Wool by Hugh Howey book review : Buy it and you won’t feel fleeced.

In today’s dystopia-crazy book world, the only real surprise about the “underground, enclosed society” subgenre making a comeback is that it’s taken quite so long. Ever since the nuclear paranoia of the ‘50s, SF has regularly explored the idea of humanity having to take shelter underground from a global catastrophe. The nature of the disaster may have changed over the years, but the themes of environmentalism and humanity’s willingness to survive against the odds are all still present and correct.

Now, the subterranean subgenre has returned in an unusual form. Written by debut author Hugh Howey, Wool is one of the latest ebook sensations to be picked up for a traditional publishing deal and a handsome repackaged edition. Naysayers will take this as another sign of the End Of Publishing As We Know It™, but Wool is actually a genuinely fascinating example of ebooks giving an author the freedom to tell a style of story that wouldn’t have happened any other way.

Set some time after a worldwide environmental catastrophe, Wool ’s plot explores life in the Silo – a massive underground society where generations of humanity have eked out an existence, protected from the poisoned world outside. Strict rules govern the Silo, its resources are carefully managed, and its ultimate punishment is exile to the surface - a fate nobody survives for long. However, as a collection of Silo inhabitants start piecing together clues and inconsistencies in the world around them, it soon becomes clear that their history may be a lie, and that finding out the truth means a death sentence…

Originally issued as a series of five ebooks and now compiled together into a chunky omnibus, Howey’s story started life as a short, self-contained novella with a satisfyingly nasty twist in the tail (presented here as the first part of the saga). The positive feedback he got from that initial release led to him expanding the world in four increasingly lengthy follow-ups. With all these combined together, the result is a genuine serial novel that builds episodically, pulling off an impressive number of twists and turns.

Many of these make Wool tricky to discuss without spoilers; let’s just say it’s the kind of story where expectations are regularly up-ended and nobody is safe. Howey uses cliffhangers brilliantly and creates an immersive, engaging story that’s anchored throughout by moody and atmospheric prose. World-building is a vital part of the equation – books like this succeed or fail on the strength of the story’s universe, and Howey gives the Silo a grimy, weathered sense of claustrophobic realism, making it a convincingly real place inhabited by believable, empathetic characters.

Naturally, once the secrets are eventually revealed, the previously ordered society of the Silo threatens to tip into all-out rebellion, resulting in some well-handled action, while the story also raises parallels with today’s environmental problems and our dependence on limited resources.

It’s no surprise that the film rights have been quickly snapped up (as one of Ridley Scott’s many potential upcoming projects). Howey has managed some very accomplished work here for a debut novel, although he does occasionally fall victim to some flaws. The climax is a little too abrupt, while the book sidesteps some intriguing moral questions about power and control in favour of a more unambiguous heroes-vs-the-villains setup.

There’s also the fact that, behind all the structural playfulness, Wool does have a very traditional (and slightly predictable) overall story arc, but ultimately these are only minor speed-bumps. There’s enough freshness in Wool ’s take on the subterranean subgenre to make it more than worthwhile. The end result is a compulsive, accessible journey into a sharply realised and well-crafted dystopian world.