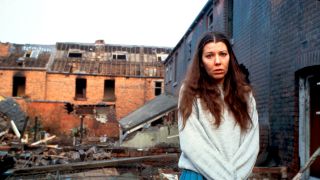 BBC drama Threads traumatised a generation of kids – and a great many adults too! Aired in 1983, at the height of Cold War paranoia, this one-off followed the build-up to and outbreak of nuclear war, following its effects on the people of Sheffield in the days, months and years to come. Based on meticulous research by director Mick Jackson (who’d previously shot a documentary on the subject) into what would actually happen, it remains possibly the most harrowingly bleak thing the Beeb have ever broadcast.

A new two-disc Special Edition DVD of Threads is released in the UK on April 9, 2018. It comes with some excellent extras, including two commentary tracks (one by Mick Jackson; one by star Karen Meagher); interviews with Meagher, the cinematographer, and the production designer; and an overview by film writer Stephen Thrower. You can buy it online at the Simply Media website – and if you enter the discount code SFXTHREADS you’ll get 10% off your order!

If you fancy getting your copy for free though, we also have 10 copies to give away. To put your name in the hat for the chance to win one, simply answer the question below: