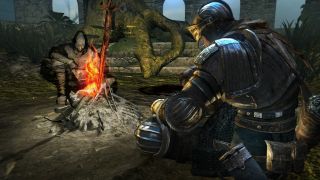 Games are great at provoking complex emotions. That’s hardly a hot take, but stay with me. Anyone who loses a round of Street Fighter 5 to an opponent with a sliver of life will experience anger and frustration. Games such as P.T. have the capacity to frighten us in ways that films often can’t. For me, however, the thing games do better than any other medium is relief. And nothing symbolises this quite so clearly as the bonfire in Souls games.

Let’s clarify something before we soldier on. ‘Bonfire’ includes the lamps in Bloodborne, with one notable caveat we’ll come to later. It’s a mechanic found in every Souls title, and it’s more complex than a simple save point. Lighting a bonfire effectively resets the world. It restores your healing items and respawns the enemies you fought so hard to defeat, and in doing so challenges the concept of progress. It’s not about powerful victories, but how far out of the slime you’ve dragged yourself. Bonfires are a meaty cocktail of progress, exhaustion and joy. Standard save points, by comparison, are like dreary diet soda. Functional, sparse, bland.

Not all bonfires are created equal. Like musketeers and amigos, they come in three varieties. The first is the simplest. This is the bonfire you find when you enter a new area, simple and welcoming like a favourite uncle. You will get to know this bonfire well. Your adventures for the next few hours will begin here, and the further you creep away from it, the more threatening and alien the world becomes. I love this bonfire because it’s a faithful constant - the save point equivalent of an immortal labrador, happily awaiting your return. (Also: if I had an immortal labrador I would call him Fur Galahad.)

The second type is very different. This is the bonfire you find after a boss fight. I rarely feel triumphant lighting this one. Instead, it feels numb. If I smoked or ever had sex, I’d liken this to that moment in a film where two clammy lovers roll off each other and share a cigarette. You’ve poured all your emotion into the battle, and often have nothing left to give. It’s a quiet moment of contemplation, spent in the glow of messages from people like you who’ve suffered and succeeded. This bonfire is a cold and broken, ‘I did it!’

The third and final type is my favourite. This is bonfire you truly earned. It’s the one hidden at the summit of Sen’s Fortress, or the shadows of the Catacombs of Carthus. You go through hell to get here. You become more frantic as you progress, praying every corner you turn will reveal the soft, orange glow of sanctuary. Sometimes, it’s actually the first bonfire, given new purpose through a clever shortcut. Either way, nothing gives me the same sense of relief. Even when it’s overshadowed by threat of an imminent boss fight, there’s a sense of having achieved something nobody can take away. (Except for Knight Lautrec of Carim, perhaps. That shiny prick.)

But what if you hate Dark Souls? There are other games that offer the same feeling, but few do it so effectively. The save rooms in Resident Evil are the most useful example. The clacking typewriters and peaceful music are wonderfully calming, but there’s always something about it quietly reminding you that you can’t stay there forever. (Also: thanks for reading this far. If you hate Dark Souls this can’t have made much sense, but I hope you enjoyed the dog pun.) Emotionally, the two games are closer than you might think: the Resi experience of opening a creaking door and not knowing what’s behind it is surprisingly similar to the furtive exploration of Dark Souls. I also get the same sensation of temporary respite from Dark Souls’ Firelink Shrine or the Nexus in Demon’s Souls. It’s a different feeling from having earned the relief of a bonfire, but it’s close.

The sanctity of bonfires is something even Dark Souls rarely desecrates. Once you see that distant flicker, you know you’re safe. The only exception I can recall is in Bloodborne, where one crucial lamp in the Hypogean Gaol doesn’t operate. Bonfires are a reassuring concession in a game where greed or desperation usually gets you killed. The most obvious example being Mimics - devious, rictus bastards who pretend to be chests of lovely loot - or glowing items which tempt you into ambushes and certain death. It’s not fair to say they’re the only ray of hope in an otherwise gloomy world - the Souls games have a wicked sense of humour, and there’s friendship and co-operation to be found everywhere - but I love them because they’re uniquely comforting. Who cares if they’re probably made of human bones? Nobody writing this article.