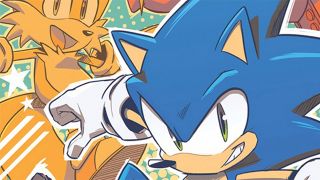 For more than 20 years, Sonic the Hedgehog occupied not only our television screens, but the pages of comic books. Published by Archie Comics (of... um, Archie fame), the Sonic the Hedgehog comic ran for 290 issues - and that's not even counting multiple spin-offs like Knuckles the Echidna and Sonic Boom, or the crossover event where Sonic met Mega Man.

Sorry. "Events," plural, because yes, that happened more than once.

In June 2017, Sega announced it was ending its partnership with Archie and shifting its Sonic comic to IDW Publishing. The first issue of the new Sonic the Hedgehog comic will hit shelves on April 4, but you can get a sense of what it'll be like right now thanks to a new interview with its lead writer and a special look at three new characters joining the Sonic universe.

When the Archie version of Sonic was just getting started, it played fast and loose with characters, art style, and lore. Eggman was known as Dr. Robotnik, Sonic and his friends lived on a planet called Mobius (which may or may not have been a post-apocalypse Earth), and there were some uh... well, whatever you'd call this:

It wasn't until much later that the Sonic the Hedgehog comic started really coming into its own, with a notable change in tone under the writer Ian Flynn. Flynn will be serving as lead writer on the IDW series, and recently spoke to Game Informer about how much is (and isn't) going to change.

"There's no connection from before aside from the creators that are involved. All of us are approaching this as a blank slate," Flynn said. "You don't even have to be super familiar with the games to get into it. If you know that Sonic is fast, he fights robots, and Dr. Eggman is a villain? Boom. You're set. I'm going to jump in and treat this series how Sonic adventures should be. Fast-paced and fun. Takes itself seriously enough so that you're engaged, but not so serious that you're rolling your eyes and saying, 'Come on, this is a blue hedgehog. Chill out.'"

Flynn went on to say that he would avoid "long monologues" and "deep world building," and that he would be drawing from the games for material. For instance, the IDW version's initial issues will act as an unofficial follow-up to Sonic Forces. Since Eggman (and it is Eggman now, not Robotnik) had conquered the world in that game but was ultimately defeated, there are scattered remnants of robots that Sonic and friends have to deal with. It's that simple, jump-on-able premise that Flynn hopes will hook new readers.

Of course, it wouldn't be a Sonic product without a new anthropomorphic animal to add to the cast. With the old Mobius gang (Princess Sally Acorn, Rotor Walrus, Antoine D'Coolette, Bunnie Rabbot) nowhere to be seen, a new friend was brought in to help Sonic on his adventures. Her name is Tangle, and she's a ring-tailed lemur.

Interestingly, her design pays homage to one of Sonic's earliest concepts. While Sega was still deciding what animal to make its in-development mascot, it floated the idea of a rabbit that would use its ears to grab and throw objects. This was scrapped in favor of something that could show off the Sega Genesis / Mega Drive's processing speed. Thus, Sonic became a hedgehog, as this would allow him to roll into a ball and blaze through levels faster than any of his competition at the time.

Flynn said that Tangle uses her tail instead of ears, but her fighting style is still an homage to those early designs of an enemy-tossing rabbit. We'll have to wait until April to get a sense of her personality, but Flynn explained she was designed to be a character that could go on adventures and kick butt without replacing any of the primary cast.

On the other side of the coin, the IDW Sonic the Hedgehog comic will introduce two new minor villains, Rough and Tumble.

Rough is the larger of the two skunks, while Tumble is the smaller. These guys aren't meant to be final boss material, nor are they henchmen to Eggman (though that's not out of the question down the line). They're starter bullies - an duo of antagonists designed to be easy for readers to love to hate while the new series ramps up.

Unlike the Archie comic series, which introduced massively convoluted family trees and character relationships with little oversight from Sega, these designs are officially sanctioned and go through an iterative design process involving both IDW and Sega itself.

Many fans who grew up reading the Archie Sonic lamented the news of its end last summer. But this new version seems poised to treat the character well, and I'm excited to see if it delivers. Issue #1 arrives April 4, with issues #2 - #4 released weekly thereafter.