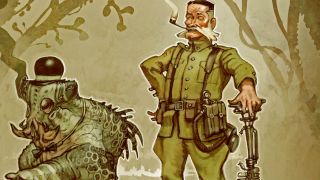 Magic Leap is one of the most closely guarded technologies in the gaming world, with little known except that it's a mixed reality (think glasses that make virtual objects appearing in your front room) and that it has people like Snow Crash author Neal Stephenson on board. Now it's ready to talk about its collaboration with Weta Workshop, the people who make props and miniatures for blockbusters like The Lord of the Rings trilogy and Thor: Ragnarok. Weta and Magic Leap have been in cahoots for the last seven years, and now they're ready to reveal more about the game that will be born from this relationship. It's called Dr. Grordbort’s: Invaders, and it will be out this year.

"You do get to shoot an awful lot of robots," promises Marvel Comics and DC Comics artist and writer, and now Magic Leap executive creative director, Andy Lanning. More than that, you get to shoot them, and maybe even feel them, in the real world.

In case you've missed the Magic Leap hype train rushing past, here's a quick catch up.  It's a very secretive, but utterly fascinating technology that uses a digital lightfield to trick your brain and make digital, virtual objects and characters appear as if they were in the real world. It sounds crazy, and just like any other virtual reality pitch, but this mixed reality has stunned the lucky few who have seen it. Put it this way: it's impressed people who build real world orcs and dragons for a living.

"The first time I tried mixed reality one of Dr. Grordbort’s: Invaders robots was flying around and I had my hand out and I started to feel a tickling on my palm and it got really itchy, I had to scratch it. It was so bizarre," says Hayley Gray, executive producer at Weta Gameshop.

The game is a first person shooter, based on the comic book world of Dr Grordbort. Grordbort is the inventor of Infallible Aether Oscillators, better known to the layman as rayguns, and the game will focus on blasting them at big steampunk robots. The exciting thing about Magic Leap's mixed reality is that Dr Grordbort and these mechanical foes could appear in your kitchen, your bedroom, or even in the toilets at work... if you managed to smuggle a Magic Leap headset in there.

This concept video from way back in 2015 gave us a hint of what we can expect, sneaking in a cheeky glimpse of some potential Dr Grordbort gameplay.

"The partnership is a really perfect match because it brings together the physical from Weta Workshop and the digital from Magic Leap, and that's really what mixed reality is," explains Gray.

The team compares storytelling in Magic Leap to theatre, you can't use a cut scene or fancy edits when the action is taking place in your front room, so you need to find a new way to hook the player.

"This opportunity represents a proper wild frontier," says Greg Broadmore, game director at Weta Gameshop and creator of Dr Grordbort. "How do you even do it? You take all your video game assumptions, all these problems that have been solved by games and then you bring them into mixed reality and find that half of them don't work any more. And that's the fun part."

That means building very complicated sets at the workshop to replicate a kitchen or a bedroom or a front room, to make sure that the game will work in everyone's home. Lanning jokes that even if they need to test the tech with a 20 foot robot in the room, that's not a problem for Weta.

No, there was no chance to try the game today, despite ever so slightly desperate pleading. Yes, my tiny nerdy heart still smashed against my ribs at the thought of a blasting robots, built by the most talented world-builders the planet has to offer, in my kitchen. Magic Leap might still be a bit of a mystery, but it sounds like 2018 is the year we all get to share in the secret, and I can't wait.