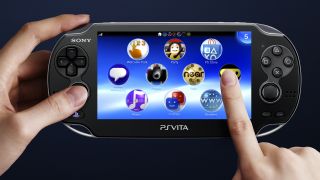 Everybody knows it’s not the size, but what you do with it, that counts. As such, I’ve always had a soft spot for Sony’s ambitious portables. Whether it’s killing a few hours (and aliens) in cars, or snuggling up in an armchair at home, there’s something magical about holding a universe within your hands.

Tilt-a-world platformer LocoRoco is so special, for example, that I recently spent several lunch breaks hunting a charger for my ten-year-old PSP after re-purchasing it from a second-hand bargain bin. Using those shoulder buttons to move the entire environment like an all-powerful god is a uniquely palpable, intimate experience that just isn't the same on a distant screen.

The same is true of PS Vita efforts Gravity Rush and Tearaway – they’re games to handle. Using the gyroscope for Kat’s gravity-defying combat feels second-nature on PS Vita – while it, er, functions on PS4. Poking up platforms (your digi-fingers appearing in-game) for Iota to hop on? Genius. Tickling the undercarriage of your PS4? Not gonna happen.

Sony boss Shuhei Yoshida has been open about his reluctance to create a PS Vita sequel, citing the success of mobile. But the way to make handheld gaming essential again is to take advantage of its singular qualities – to craft more of the unparalleled, the innovative, the must-play. No-one’s clamouring for Candy Crush copycats and compromised big-budget IPs. We need console-defining originals that could only be played on handheld.

And PS VR? If it wants to become essential, it should adopt a similar philosophy. Accepting the unique tech’s limitations while weaving unmissable experiences from its strengths will surely have those headsets selling fast. As for PS Vi-Two, I live in hope. Perhaps it could prompt a game that’ll have me pestering the robo-cashiers of Holo-CeX in ten years’ time.