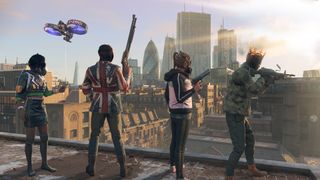 The director of Watch Dogs Legion has been interviewed from within the game – a world first, according to the BBC.

BBC Click presenter Marc Cieslak was invited to Ubisoft Toronto where he was scanned with a capture rig and popped into a virtual recreation of London's Piccadilly Circus – a famous London landmark you'll be able to visit in-game – thanks to the magic of motion capture. He was joined by Watch Dogs Legion's creative director, Clint Hocking, to talk about how the game is shaping up so far.

Watch Dogs: Legion. In a world first @MarcCieslak interviews the games creative director inside the video game itself.Catch it on TV @BBCBreakfast and @BBCClick. pic.twitter.com/U3FQXiRQGrJanuary 25, 2020

As described by the BBC, the game "imagines a post-Brexit dystopian Britain as an oppressive surveillance state, where the player assumes the role of a hacker intent on bringing down the system by recruiting others to their cause".

Hocking expanded on the open-world game's themes further, stating that as "creator[s] of culture", the video game industry has a "responsibility to look at the things that are happening in the world around us and have something to say about that, to create something that's meaningful that people can look at and engage with and it speaks to the world that they live in". That's why the developers chose to set the third Watch Dogs game in a post-Brexit London.

Ubisoft announced last year that Watch Dogs Legion – along with Gods & Monsters and Rainbow Six Quarantine – has been pushed back into the company's next financial year. Ubisoft's fiscal year starts on April 1, 2020, so that means Watch Dogs Legion could be delayed from its previous release date of March 6, 2020, by less than a month... or by as much as a year.

Delaying that trio of games leaves Ubisoft with a quiet early 2020, though the company noted in a press release at the time that it means the company now has plans to release five triple-A games in the same financial year. CEO Yves Guillemot explained in the release that the decision to make these delays was driven in large part by the negative reception to Ghost Recon: Breakpoint, which did much more poorly than Ubisoft had expected, both critically and commercially.

GamesRadar+ is tracking the 20 biggest games that will define 2020. Find out why we think Watch Dogs Legion will be one of them – click through to our Big in 2020 coverage hub.