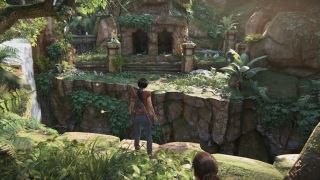 Although no doubt you’ll get lost in Chloe and Nadine’s journey to discover Ganesh’s tusk, there’s plenty of other content to get involved with in Uncharted: The Lost Legacy. And one of those is the White Monkey Temple, a special area within the hub world of the Western Ghats that can take you away from the main storyline for a little while.

Uncharted: The Lost Legacy’s White Monkey Temple is actually quite the handy place to go if you’re a completionist. If you’re the kind of gamer who wants to find every single piece of loot scattered throughout The Lost Legacy, then you need to head over there ASAP. Because it’s only by discovering the White Monkey Temple and its quest that you’ll be able to get your hands on this:

This rather snazzy bracelet is actually the Queen’s Ruby, and it has quite the magical power. Any time you’re near a hidden treasure - one of the 68 lurking in nooks and crannies across the game - your controller will vibrate and emit a kind of shiny noise to alert you to its presence. It’s incredibly handy if you want to get all the goodies on your first playthrough without having to go out of your way to find them yourself.

Find out how to locate every treasure using our Uncharted: The Lost Legacy collectibles guide.

Thankfully if it gets too annoying, or distracts from the game itself, you can turn off the Queen Ruby’s power in the pause menu, where you can also toggle the photo mode.

But in order to get your hands on that shiny ruby, you’ll first need to find the White Monkey Temple.

Where is the White Monkey Temple?

The White Monkey Temple is located in the north eastern part of the Western Ghats area that you’ll be driving through in Chapter 4 of The Lost Legacy. When you arrive, first head for the tall tower in the centre of the map, as it’ll allow you to get your bearings and mark key locations on your map to guide you through the next part.

When you get to the top of the tower, you’ll be presented with a set of wooden shutter-like doors that Chloe can push open to guide her to different areas of the map. To continue the story, you’ll need to complete the puzzles located within the forts marked with the symbols of the Hindu gods - Ganesh’s trident, the axe and the bow. But one of the doors in the tower is marked with a face surrounded by 10 other smaller faces, like this:

Pushing that door will let Chloe see the far-off location of the White Monkey Temple, although she won’t know that yet. Instead, she marks its location on the map with a question mark. After that, it’s up to you to jump back in the jeep and make your way over there.

When you reach the White Monkey Temple you can just waltz right in, appreciate the cheeky little white monkeys themselves and then head inside to see the Queen’s Ruby locked away in a small cage with a map of the area behind it.

How do I get the Queen’s Ruby?

In order to get the Ruby out of its cage, you’ll need to fill the holes on that big old map on the wall with 11 Hoysala Tokens, which are big golden coins hidden in Western Ghats. Once you collect the first one from the little room on the left that opens up after you’ve seen the ruby, the 10 other locations will be marked on your map with the same emblem that was on the door in the tower.

Actually getting each token will require you to complete a puzzle, defeat some enemy soldiers or navigate your way across an assault course of sorts.

Find out how to locate each token using our Uncharted: The Lost Legacy Hoysala Tokens location and puzzle solutions guide.

After you’ve got all 11 tokens jangling in your pocket, head back to the White Monkey Temple and feed them all into the map behind the ruby to earn your prize.

You’ll also want to make your way through the newly opened door to the right and go meet the monkeys. You can’t pet them, sadly, but you can grab the three collectibles hidden in their inner sanctum. Take that, monkeys.