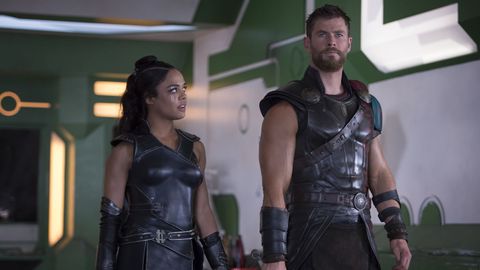 Total Film, the UK's smartest film magazine, is part of the GamesRadar+ family, with unique insight and fresh perspectives on the biggest and most interesting films of the year. Here's Total Film's review of Thor: Ragnarok by Kevin Harley, giving you another in-depth verdict on one of the biggest movies of the year.

Pick up the latest issue of Total Film magazine from newsagents or subscribe so you never miss an issue.

When a Twitter follower asked Thor 3’s director if a certain job opening in another major saga might lead to a "@TaikaWaititi #StarWars movie", his reply was chuckle-some. "Lolz. I like to complete my films."

Despite the Thor saga’s past issues with departing directors, Taika Waititi completes with rollicking style on his Asgard trip. While Ragnarok delivers the mythical soap-opera business you expect from the MCU, Waititi blows away The Dark World’s indistinct hammer thuds, instead aiming blasts of fresh, flavour-rich comic air at a tricky title character’s Th-tory. Those ‘Asgardians of the Galaxy’ puns will stick: despite minor niggles with the drama, Ragnarok is both the MCU’s funniest outing yet and its clearest beneficiary of a playful, character-ful director’s voice since Guardians.

The Waititi-ish drollery arrives fast with a belly-laughs piss-take of monologue-ing monsters and a mock-macho meeting with Karl Urban’s Skurge, dolt-com stand-in for Idris Elba’s Bifrost sentry Heimdall. Between some cavalier plot lurches and cracking cameos, Anthony Hopkins also has fun impersonating Loki impersonating Odin, before returning as real-Odin to warn Thor (Chris Hemsworth) of a bigger menace than Loki (Tom Hiddleston, refreshingly re-deployed as an ensemble player rather than a sneak headliner).

A buddy romp about men out of place folded into a pop space opera, it’s a set-up that recalls Waititi and Jemaine Clement’s vamp-com What We Do in the Shadows even before we reach the ace vampire joke. And, lest you doubted his ownership, Waititi makes every one-liner kill as the voice of rock revolutionary Korg the Kronan, whose misunderstanding (perhaps…) of Thor’s special bond with Mjölnir numbers among the many gags you might miss through the laughter gales.

Meanwhile, Blanchett faces her own gladiatorial battle: with the curse of the squandered Marvel villains. She wins by dint of blazing charisma but she is underused, reduced to oozing malignantly around Asgard and spearing victims. Aside from a brought-to-heel Skurge, Hela lacks someone to grapple with, to bounce off.

But every character gets to shine in the above-par end-stretch. Waititi’s variant on Marvel’s climactic mega-rucks suffers from ‘giant CGI thing’ cliché, but it gives each lead their moment, shakes the Thor saga’s foundations, lands Hulk’s best sight-gag yet, and opens vistas of promise for Thor’s return in Avengers: Infinity War and beyond. Here’s hoping Waititi returns for Thor 4, assuming he’s free. After this rocket up Asgard’s rump, he’ll surely be in heightened demand whether Star Wars wants him or not...