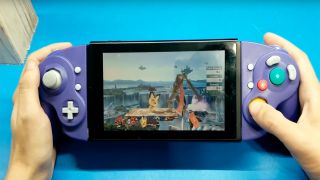 A modder by the name of Shank Mods has created GameCube Joy-Cons for the Switch, and it looks seriously cool. In a video on YouTube, Shank Mods explains the process behind the awesome mod, which required "several months of planning and hard work."

By stripping down a set of Joy-Cons and placing the components into a GameCube controller, Shank Mods wired buttons and sticks to the Joy-Cons' board. The actual GameCube controller had to be redesigned with custom 3D printed components to get it to work. Given how tricky this mod was to pull off, Shank Mods states in the description that they will not be making another set to sell.

After seeing mock-ups of GameCube Joy-Con controllers for the Switch, Shank Mods was convinced Nintendo or another modder would eventually make it happen. "However, after two years, the release of Super Smash Bros. Ultimate, and the reissue of official GameCube controllers, I knew I had to," Shank Mods explains.

While there are some fantastic Switch Pro controllers on the market right now, the GameCube controllers have always been the go-to option for fans of Smash. But this takes the controllers to the next level by letting you attach them to your Switch controllers Joy-Con style, not unlike the NES controllers you can get for the Switch if you have a Nintendo Switch Online membership.

You can follow the entire process of how the impressive mod came to be created in the video above, with lots of testing and trial and error to get the controllers to work with a GameCube makeover. You can also see footage of the controllers working on the console - it's certainly left me wishing I could get my hands on a pair for my own Switch.

Here are all of the upcoming Switch games for 2020 (and beyond) or take a look back at the last 10 years with our pick of the best 100 games of the decade: