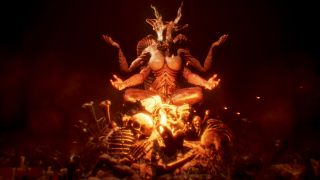 Two hours into Outlast 2 and the sight of corpses - even when they were dead children - didn’t make me bat an eyelid. Three hours in, I was faced with dismembered limbs and skinned bodies. I didn’t care. You see, in shock terms it’s hard to top seeing a body that’s been drawn and quartered in the first five minutes. With most horror games this would be a disaster - but not for Agony. Agony wants you to shrug your shoulders at innards splayed across the wall. Trust me when I say that from that point on, it can only get worse...

Taking you to the pits of Hell, Agony has you controlling a soul who can possess bodies of either humans or simple-minded demons. Your ultimate aim is to find the Red Goddess, who’s rumoured to have created Hell. She’s the only one who knows the way out. Outlast 2 has a similar vibe, with you trying your darnedest to get back to your wife and out of the hillbilly hellhole you’ve plummeted into. Both depend heavily on gore. Outlast 2, however, stumbles at the first hurdle. Blood and guts is horrifying - there’s no way I’d argue against that - but seeing it again and again eventually makes you indifferent. Agony’s different because the creators know this is going to happen. In fact, that’s the whole point of its gore-tastic first level. Our 14 gifs that prove Agony is already the most horrific game of 2017 drew some comments that readers didn’t find gore that scary, or that it didn’t bother them that it was set in hell. If you remember thinking the same thing, I have one thing to say: good. That makes you the perfect person to play Agony.

Tomek Dutkiewicz, the brain behind Agony and CEO of Madmind Studios, tells me that they actually want you to get bored of slaughtered remains. Gore is a starting point for a much deeper sense of horror; one that goes beyond shock tactics to resonate with your primal fears. “The first hour of the game will force players to walk around the piles of corpses and bones, and after the first shock, it will not make an impression anymore,” says Dutkiewicz. “Taming the player with an extreme dose of gore makes us able to introduce interesting new motifs that do not rely on having corpses everywhere. The players will wonder why blood and bones have stopped making an impression on them - or at least we hope so”. Hopefully the final chapters of the game will make you face just how far you’ve come. Wondering whether you’re a bad person for shrugging at the sight of dismemberment would be a staggering end to Agony. Such apathy would bring you closer to acting like a demon than a human being.

Fed up with the idea of Hell too? I’m not surprised. Everyone is familiar with the idea: fire, demons, screaming, general not-having-a-whale-of-a-time vibe. Such familiarity makes strolling through that underworld a walk in the park for most people. Good horror comes from getting you used to one thing (like Hell), and then uprooting you to somewhere unfamiliar with new rules and dangers. Tiptoeing through the asylum’s corridors in the first Outlast carries on for just about the right amount of time before pushing you into the cleaner, clinical laboratory. Suddenly everything feels too open, and you almost yearn to return to the decrepit asylum. This is exactly the route Agony is going down. Dutkiewicz tells me that “although the classic image of Hell with the red demon and the lake of fire is best known, it cannot be regarded as the only and right vision of this realm. Agony refers to many religions and systems of beliefs, but does not focus on a specific one. Doing so would make the players think ‘I've seen it somewhere before’”.

Finding somewhere more horrifying after exploring this horror stereotype sounds tricky. It involves the creators taking the time to interrogate their primal fears; questioning why something shocks them to the core and unpicking the shivers it sends down their spine. “I had to reach into my own mind and get inspiration directly from there, trying to show players the places from their worst nightmares, to extract their original fears which they themselves are afraid to talk or think about”, Dutkiewicz reveals (probably shuddering at the same time). Hence the baby-crushing wall. Yes, that’s a real thing. You might not even know you’re scared of something until it pops up in the game, as it certainly sounds like there was a lot of psych-examination behind the scenes.

As the mind behind each environment’s layout, level designer Jakub Grabka is conscious that having scares constantly thrown in your face can get frustrating, and - even worse - dull. So (this is thoughtful, I assure you) there’s going to be locations where you won’t have awful things stalking you. Resident Evil 7 follows this pattern too to great effect. Having Jack Baker stomp after you and smash through walls to block your path was made much worse by every now and again leaving you alone in the Baker house. Its eerie, almost homely atmosphere pressing in on you, the slim corridors and disconcertingly ordinary family knick-knacks make you dread turning every corner because at some point all this quiet has to end. You’re dreading that moment from the very beginning. “We didn't forget about quiet places where player can rest and recover his stamina and sanity”, says Grabka. “Without those we would fail to fear in the long run because the player would get used to scary moments and horrifying environments”.

Unfortunately Outlast 2 suffers from this problem. So many chase sequences being thrown your way means that they quickly get frustrating. There’s no time to calm down, reduce your heart rate, drink in the scenery, and thank your deity of choice that it’s all over - for now. Dragging out these quiet moments makes the following scares even better (or worse, depending on your penchant for horror) as you never sway into thinking that being in a permanent state of being terrified is the norm. Explaining how they’ve designed those heart-thumping moments, Grabka says that your feelings of dread might come from “a demon following your every step, or maybe a normal room without anything special... just the emptiness and lack of scary elements will create an uneasy and dark feeling inside your guts”.

As for what’s waiting for players after the blood-and-guts stage of Agony, Grabka remains tight-lipped. Getting to that stage wasn’t easy. “The hardest part was at the very beginning,” says Grabka. “Switching from ‘normal’ titles to something heavy like this was very unusual. However, daily doses of gore elements and constant interaction with such an environment changed it into something normal after just few weeks. Gore and taboo ceased to abhor or scare. This allowed us to go beyond the barriers and move on to topics that many people prefer to forget. What you have seen so far is just the beginning”. That sounds ominous. Which is most definitely a good thing.