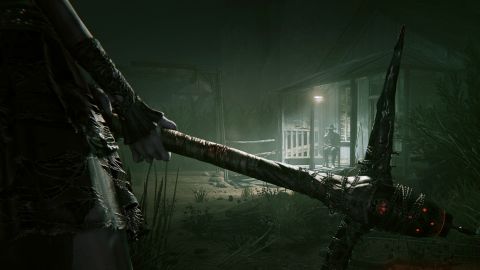 Horrific in completely the wrong way, Outlast 2 is a night-vision journey into frustration. An intriguing story just can’t save the infuriating misery that awaits.

The original Outlast is a masterclass in horror, its first hour an intimidating lesson in building fear and tension. From the moment you clamber into the abandoned Mount Massive Asylum - through a window that has clearly been used as an escape route - the grim found-footage survival horror that awaits inside is disturbing and beautifully constructed. The glowing eyes of the inhabitants lurking at the end of dark corridors means that night-vision has never been as terrifying.

With this in mind, I’d like to be able to say that I’m not angry at Outlast 2, I’m just disappointed. But I am angry. I’m so angry. I was so furious playing, that on one occasion I had to go and wash my face with cold water just for something to do that wasn’t removing my own eyes with a spoon.

Given that Outlast already has a follow-up of sorts in the shape of prequel Whistleblower, there was no need to go over the same ground again. Thus developer Red Barrels has shifted its night vision gaze to the dusty Arizona desert, where journalist Blake Langermann and his wife, Lynn, are investigating the murder of a pregnant woman. It’s no spoiler to say that it all very quickly goes downhill, as their helicopter falls out of the sky and Blake wakes up alone in the burning wreckage with only his camera and some spare batteries for company. Before long, he’s wading through cornfields and corpses, uncovering a disturbing Satanist cult as he attempts to find his wife. Just like the original, Blake can only run, hide and film, nothing else, leaving you utterly helpless in the path of whatever lurks in the dark.

Helpless is the key word. Where this worked perfectly in the more constrained environments of the original, as you dart into nearby lockers to avoid patrolling enemies, feeling equally terrified and smug as they wandered past, Outlast 2 has a very different plan for you. Namely, running. While the more open environments do have scattered barrels to jump inside, and you’ll need stealth to survive some sections, you’re more likely to have a (remote) chance to live if you just start to run. Death isn’t just a key theme in these beautifully grim environments scattered with bodies on spikes. It’s just what you do. You’re going to die. A lot. Get used to the loading screen. It’s your new best friend.

With the grisly heights of Resident Evil 7 to compete with - we’ve seen plenty of squalor and filth already this year - Outlast 2 needed to deliver something fresh, but instead serves up near instantaneous frustration. While the very first sequence builds up sound and atmosphere expertly, as screams float gently on the wind and abandoned farm buildings creak in the night, it unfortunately also includes the first interaction with a recurring foe, Martha.

Tall and terrifying, at least when she first looms out of the mist, she’ll slaughter Blake instantly with an enormous glowing pickaxe. While the first time she stabs you in the crotch - and you watch the blood spurt and pour from where the fun used to live - is suitably disturbing, by the sixth death, the scenario becomes somewhat trying - especially when you’ve still not worked out where you’re meant to run. Oh, you mean that tiny un-signposted hole under a gate in the dark?

7 things I wish I knew before starting Outlast 2

Sadly, this isn’t an isolated incident. Every time you think you might be enjoying yourself too much just exploring the world, another forced flight section appears to quash that elation. Having fun there? Here, have some more corn and flashlights. How about some one hit kills just for good luck? Or, even better, here’s six hicks in checked shirts, a QTE prompt, and no chance to use your healing bandages.

Despite a suggestion of choice in this open looking world, Red Barrels wants you to do something very specific in each section. While sometimes signposting is clear, with bloody handprints telling you where you can climb walls, elsewhere it fails miserably, leaving you circling grim environments, desperate to see where to go next. Night vision might be scary, but it also renders any environmental cues nigh on useless. Anyone who says this is a quest for realism should also try to rationalise why Blake can’t pick up anything other than batteries, bandages and sheets of paper. This is literally a game where you can run out of batteries in a room containing another torch. Outlast 2 is a disturbingly infuriating exercise in disappointment.

Repetition is also the order of the day with a new camera function. In the least welcome mechanic since Wolf Creek’s Mick Taylor arrived in a tow truck, when Blake points his long suffering device at certain parts of the environment a red circle gradually fills up telling you it’s ‘Important’ and that you’re recording it. Not only do you have to watch the probably static scene for ten long, dragging seconds, you also have to watch it back, this time with Blake’s panicked thoughts. Why on earth he couldn’t have espoused his bleak ramblings while looking at it the first time is unclear, but the ghost train judders to a stop every time, killing any tension built up by, y’know, not dying for fifteen minutes.

It’s a shame then, that the story is so good and there are some flashes of brilliance. Red Barrels knows horror. Every inch of this world, from the cornfields to the mines into which you must eventually descend, is beautifully realised. The notes scattered everywhere and the paintings of the hideous Papa Knoth, the leader of one of the aforementioned cults, are hideous glimpses into a horrific and senseless nightmare. Blake’s flashbacks to his childhood, when a friend apparently committed suicide, see you exploring the hallways of a school and are stark reminders of the horror of the original Outlast.

There’s genuine fear here. These sequences are packed with expertly crafted jumps and atmospheric terror as you wander the passages and crawl through claustrophobic air conditioning ducts. The transitions between the past and present too are brilliantly realised. It’s just hard when you have to admit that you wish you could stay in the school, a better location for Red Barrels’ expert talent in siphoning you through controlled scares.

There are a few standout moments in the present, other than the intriguing story. One sequence sees Blake on a raft, travelling below imposing cliffs where nightmares await, taking in the horror passively, a world away from the mindlessly frustrating chase sequences. I’ll keep spoiler-free, but other, more narratively important scenes are hideously, entertainingly grisly, unafraid to disgust you with their first-person journey into hell. Plus, the addition of the camera microphone is an enjoyably tense way to hear when enemies are on the other side of walls, without actually peeping your head around.

Violence is dealt with deftly, disturbing where it needs to be and even darkly comic when it’s allowed. It’s a pity, then, that the game is so inherently flawed. Horror games have to walk a line between joy and nastiness. You have to want to be afraid, yet still compelled to keep going into the darkness. Unfortunately, in Outlast 2, all I wanted to do was put down the controller.

Horrific in completely the wrong way, Outlast 2 is a night-vision journey into frustration. An intriguing story just can’t save the infuriating misery that awaits.