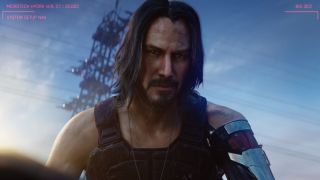 Cyberpunk 2077 may be delayed, but Funko Pop Keanu Reeves is here to boost your spirits.

The first set of Cyberpunk 2077 Funko Pops were revealed at this year's London Toy Fair. They'll include two (count 'em, two) versions of Reeves' Johnny Silverhand, as well as both a male and female version of V. You can either get Sunglasses Keanu Reeves dual-wielding pistols (decidedly more menacing) or Relaxed Keanu Reeves kneeling down, eyes asmolder (decidedly more intoxicating). Both versions of Johnny Silverhand feature a cocked eyebrow and show off his muscles and, well, his silver hand. Check it out below.

The male and female versions of V are based on the character builds we've seen in trailers and promo artwork - female V has an asymmetrical bob, and male V is sporting the now-iconic jacket from the game's cover art. It's nice to see both V options, as the McFarlane Cyberpunk 2077 action figures only offer up the male version.

Funnily enough, the Cyberpunk 2077 Funko Pops are set to release on April 16, 2020 - Cyberpunk's original release date. As we previously reported, the game has been pushed back to September 17 (a five-month delay), to give the team at CD Projekt Red more time for "playtesting, finishing, and polishing." So we may not be able to explore Night City this April, but at least we'll be able to get a confusingly attractive Keanu Reeves Funko Pop around then, right?

It's still only January, but 2020 is already proving to be a banner year for video games: a slew of game delays, purported next-gen capabilities, and an inexplicably attractive Funko Pop. What's next? You know what, I don't wanna know.

Are you a merch fan? Of course you are, which is why you'll be happy to know Baby Yoda is coming to Build-A-Bear soon.