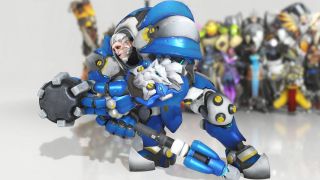 The Overwatch Anniversary Event is live now and there's something in it for you whether you've been playing since day one or are new to the world of payload pushing. The skins are legendary, the arcade modes are well thought-out, and the dances are plentiful. Let's take a look at the coolest new additions.

Elimination gets a serious boost

Back in the old days we had two Elimination modes and one Elimination map and we were happy, dagnabbit. Now these Overwatch Year Two whippersnappers have three new maps - the Dorado-adjacent Castillo, Eichenwalde-ish Black Forest, and Temple of Anubisian Necropolis - and two new clever new modes to play on them. Blizzard has also added a game-winning Capture Point mechanic to Elimination's Sudden Death, which should discourage turtling.

Elimination: Limited Duel is a one-on-one fight where both players can pick from the same random assortment of three heroes, encouraging rock-paper-scissors mindgames and counter-picking. Elimination: Lockout is a three-on-three fight in which players are free to pick whoever they want… but once you win a round with those heroes, they're locked out for your team for the rest of the match. Time to expand your repertoire! These new maps and modes will remain accessible even after the Anniversary Event is over.

So many legendary skins

Every single hero gets a dance emote. Well, Reaper's dance is just rhythmic toe tapping, but you wouldn't want him to break character too much. The bad news is that - just like the skins - they'll only be available in Anniversary loot boxes. So if you want to collect all 24 you'd better get busy.

The Overwatch Anniversary Event will end on June 12. Even if you don't own the game you can still get in on the free Overwatch weekend starting on May 26. Before you do, check out our Overwatch tips and make the most of your game time.