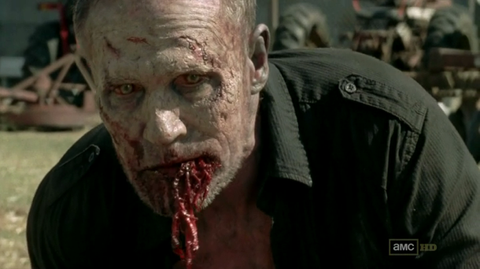 THE ONE WHERE Rick plans to hand Michonne over the Governor, and encourages Merle to take her to him. He changes his mind – but it's too late to stop the bloodshed.

VERDICT The first part of season three's finale is a deceptively low-key affair. For a good 25 minutes or so, the main dilemma here is if Rick will hand over Michonne to the Governor, or if – as Merle predicts – he'll buckle and change his mind.

The question of whether Rick should sacrifice one of his own for the good of the group is a fascinating one. It's the sort of quandary that the ’70s Survivors did so well. Unfortunately, it's rather let down by the fact that we know that it's not going to have any real effect... Even if the Governor does get his hands on Michonne, he's still going to attack the prison. And if we know that, surely Rick must be equally aware.

No matter. It's really just an excuse to get Michonne and Merle on the road together. Given that they're the season's best characters by far – and that they hate each other’s guts – that's a recipe for great drama. And indeed the episode delivers. What's fascinating here is how Michonne manages to tease the humanity out of Merle. It's always been there, buried beneath the spite and snark. As the two travel to Woodbury, she taunts him into revealing his self-doubt and long-buried compassion. We learn how many people he has killed (16 – though that figure has gone up by the end of the episode) and that all of those were after the apocalypse, leaving you to wonder what sort of a man he might have been in his former life. Basically, they do a Spike from Buffy on him – humanising him, without removing his snark.

Which brings us to the episode's big twist. By the end, Merle has let Michonne go, and launched a suicidal one-man assault on the Governor. But after taking out several of the Woodbury soldiers, he has a brutal fight with, and is killed by the Governor. It's a shocking moment, but it also leaves the show lacking one of its most memorable characters. For all its many qualities, this show doesn't exactly have a surfeit of compelling leads. Now there's Michonne and Daryl and, er, that's about it. Game Of Thrones can get away with slaughtering it's characters willy-nilly. The Walking Dead may have a harder time filling the Merle-shaped gap – especially given how badly they've screwed up Tyreese's character so far.

On the plus side, the final shoot-out is brilliantly tense and exciting. And kudos to Norman Reedus, who plays Daryl's despair perfectly. He doesn't hold back or play it cool – it's a full-on breakdown, followed by his bloody despatching of Zombie Merle.

Elsewhere in the episode there are a few great, smaller moments. Michonne actually cracks a smile for a change – and blimey, how different she looks when she does! There's another of Dead Lori's visitations, but it's actually really effective this time. Rick's folorn “she's not there” is an acknowledgment of what he's lost, but he's stronger now, and he can endure it. And his confession to the group that he planned to hand Michonne over is a deliberate counterpoint to his “my way or the high way” speech last season. The Ricktatorship is over... just in time for next week's inevitable bloodbath.

RICK'S A POET, BUT HE DOESN'T KNOW IT “He said he would leave us alone, if we gave him Michonne.” Well, it's not Keats, but it's a start, Rick.

THE BUCKET LIST So, we've just lost another regular. But that's surely not the end of the carnage... Next week is the big finale, and there will be blood. This is pure speculation, but here are my predictions for who might not be walking away from this season...

• Milton: he's been winding the Governor up something rotten the last few weeks. He's obviously going to wind up as zombie-bait.
• Martinez: A dead man walking.
• Maggie: She's just accepted a marriage proposal. Wouldn't it be tragic if she gets killed before she can wed Glenn?
• Tyreese: It would shock the fans – especially if he takes the Governor's side and Rick kills him.
• Beth: Who, you ask? Exactly...
• Carol: Hasn't done anything interesting for weeks. An easy target.
• The Governor: Well he's got to die eventually... but I wouldn't be surprised if he's back for season four.
• Hershel: He's a grizzled veteran now, and the show needs a voice of conscience. He'll probably be okay... For now. I'd wager he'll cark it mid-way through season four.
• Glenn: The show would be poorer without his innocence. Safe.
• Andrea: The show's female lead now. I suspect her survival is assured.
• Daryl: He'll be fine.
• Carl: As will he.
• Rick: Unlikely to die at this stage. Lincoln seems happy in the role for a few more years at least.
• Michonne: Not a chance. A clear fan – and writer – favourite.

BEST LINE
Merle: “I figured you'd run!”
Michonne: “I wanted my sword back before I get away.”

Read all our The Walking Dead season 3 reviews