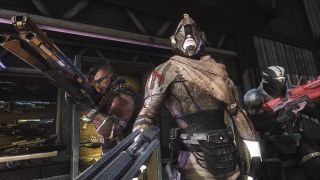 The Destiny series is a bit of an anomaly in the games market. Its unique blend of first-person shooting and large-scale multiplayer exists in very few games, so Bungie's behemoth stands in a genre relatively unopposed (though Warframe and The Division do come to mind). But a blast from the past may be worth keeping your eye on if you like these loot-n-shoot style games: Defiance.

Not ringing any bells? Let's rewind a bit.

The year is 2013. Searching for its next big hit, the SyFy network introduces Defiance - a sort of science-fiction / western mash-up where Earth has been terraformed and humans now share the planet with a variety of alien species. At the same time, development studio Trion Worlds reveals Defiance, the video game. This MMO shooter is designed to function as a loose tie-in to the show, where major events and characters might be referenced, but players are largely free to do their own thing.

Fast-forward to today, and Defiance (the TV show) has been off the air since 2016, while new games have risen to occupy the MMO / shooter hybrid niche. But don't think of Defiance simply as an old horse in the race, waiting to be put out to pasture. In a video message to players, Defiance producer Matt 'Destromathe' Pettit says that the team is tearing down the old game to relaunch Defiance as something new called "Defiance 2050".

This includes porting the game from previous-gen consoles to PS4 and Xbox One, updating the PC version, giving the game a new coat of higher-res paint, implementing a new class system, and a whole bunch of other stuff to be revealed over the coming months. While Pettit doesn't come right out and namedrop Destiny, it seems clear that Defiance 2050 would like a piece of Bungie's pie.

Both games are similar in their setups - science-fiction technology fused with Wild West symbolism, like the lone gunslinger archetype - and plenty of both PvE and PvP content for players to enjoy. However, where Destiny focuses a lot on funneling players toward PvE endgame content (Raids), Defiance relies more on randomized events where players can jump in and out of participation at any time and any level.

Anyone who likes (or once liked) Destiny ought to keep an eye on Defiance 2050. I just hope this relaunch will be a little more Final Fantasy 14: A Realm Reborn and a little less Star Wars Galaxies: New Game Experience (if you're not an old-school MMO player, just know that the first one of those was a really good relaunch and the second one was a really, really bad one). You can sign up for the closed beta now, or just wait until Defiance 2050 launches this summer to see how it turns out.