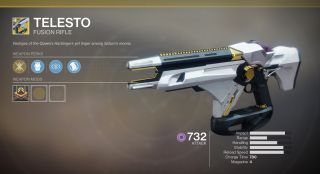 There are three absolutes in life: death, taxes, and Telesto bugs. Destiny 2's beloved Exotic fusion rifle just can't help itself. Season of Dawn has only just begun, but Telesto's broken the game yet again, as Theawesomepotato demonstrated in this short video:

This is classic Telesto nonsense. For the uninitiated: unlike other fusion rifles, Telesto fires sticky, proximity-detonated projectiles instead of energy beams. I don't know if these projectiles were made using voodoo magic as opposed to software, but clearly, they love to mess with Destiny 2's engine. That's what's happening here: the seasonal mod Heavy Handed, which grants special ammo for getting kills with a fusion rifle while surrounded by enemies, is registering each Telesto round as a defeated enemy and returning upwards of six ammo per burst. Voila, infinite ammo. Enjoy your new fusion rifle primary.

As we reported *checks notes* less than two months ago, this happens all the time. The storied tradition of abusing Telesto goes back to Forsaken, where Telesto's rounds could be detonated to progress the 'dudes killed' bar in Blind Well. The same glitch could be used to cheat the Gauntlet stage of the Menagerie in the Season of Opulence. More recently, in the Season of the Undying, players found a way to use Telesto rounds in tandem with the Ashes to Assets mod to gain functionally infinite Supers - a glitch which was so disruptive that Bungie straight-up disabled Telesto until it was fixed. I don't think the new special ammo bug will get Telesto disabled - although it could lead to some degeneracy in PvP - but you can bet it'll be fixed soon.

If only because this is the funniest monkey's paw I've ever encountered, I'll ask it again: what will Telesto users think of next?

Here's what to expect from Destiny 2: The Dawning.