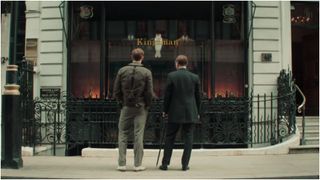 Manners may maketh the man, but Eggsy does not makesth the Kingsman movie.

The next instalment in the Kingsman franchise, titled The King's Man, will not feature Taron Egerton's cheeky Londoner and will instead act as a prequel to Kingsman: The Secret Service.  The trailer for that movie has just been release and features all the espionage antics you expect from a Kingsman movie - just with a new set of faces doing the spy work.

Ralph Fiennes leads the cast as an older gentleman who trains a young man (Harris Dickinson) to become a member of the Kingsman. Sound familiar?  It's the same dynamic seen in the other Kingsman movies, which featured Colin Firth's Galahad teaching Egerton's Eggsy how to be an international man of mystery.

The official synopses for the movie, which takes place during the First World War, reads: !As a collection of history's worst tyrants and criminal masterminds gather to plot a war to wipe out millions, one man must race against time to stop them."

Matthew Vaughn, who directed the first two Kingsman movies, returns to helm the prequel, while Jane Goodman's also back as writer. And fear not, those Kingsman fans who already miss Eggsy - the youngster will be back in the already announced third main-story Kingsman movie.