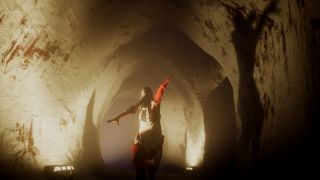 The Blackout Club has released a new update today which adds two new mission types and a mysterious new location that players will need to investigate. The highlight of the co-op horror game’s update is the new curse system, which introduces optional negative effects that players may discover in their missions.

Picking up cursed ciphers will handicap players with various gameplay-altering effects, making it harder to escape Sleepers, Lucids, and of course the fearsome Shape. Players who do manage to overcome the odds will earn better end of mission rewards not just for them, but for their entire team of up to four players. The developers at Question stress that curses are not an item and therefore cannot be swapped to another player, dropped, or re-equipped. You’re stuck with the hex until you are caught or escape the mission for good.

In addition to curses, two new mission varieties come to The Blackout Club’s suite of procedurally-generated missions. Trace Race has players heading below the town of Redacre and into its elaborate subterranean maze to lift data off a computer. Once you do that, you then have to trace the data back to its origin and record your findings. Sometimes multiple computers have to be hacked, and as soon as they’re all hacked, enemies will be onto you, so you’ll have to move swiftly.

Shadow People is the second new mission type and involves players collecting electronic eyemasks around the map. Performing exorcisms on the masks will decode the messages recorded in “Old Tongue'' in order to one day decipher the language of the gods. It’s yet another layer to the game’s Enhanced Horror feature, where you can be invaded by these gods who speak to you personally. Trace Race unlocks at player level 3, while Shadow People will start cropping up in the game’s randomized mission suite after you hit level 10.

Because the developers at Question are always pushing the weirdness envelope, the game also includes a new area, The Place Between, though details are purposely vague as to what this new space entails. It sounds like the investigation-friendly town will soon have players digging deeper into its dark history. The Cursed Update is now live and free for all players.

We didn’t want to spoil Enhanced Horror in this story, but if you’re really curious, here’s what you need to know.