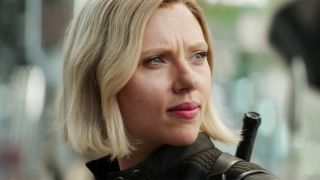 Common logic would dictate that the Black Widow movie is going to be a prequel. Well, duh. Avengers: Endgame had that moment, so attention naturally turns to how far back things will go for Natasha Romanoff’s solo film. But it’s probably not going to be an origin story - which might surprise some.

In fact, the Black Widow movie could be smack-bang in the middle of Marvel Phase 3’'s timeline . How do we know? A leaked product placement shot, of all things. 2019 is the gift that never stops giving.

As spotted by Nacao Marvel, a Portuguese Twitter account, a recent photo has emerged of Scarlett Johansson driving with the top down while filming the Black Widow movie. She’s not just driving any car, though. It’s (apparently) a BMW Series 5 Touring Wagon. Stick with me, that’s important. Honest.

That particular BMW was released in 2017. Unless someone’s made a big production goof, that places the Black Widow movie at some time after Captain America: Civil War in 2016 and before Avengers: Infinity War in 2018.

The MCU timeline is a confusing beast, but those years are two certainties. Steve Rogers confirms as much when he mentions he’s been on the run for two years post-Civil War. A beard that nice doesn’t grow overnight, let me tell you.

But back to Black Widow. Far from the origin story some we may have suspected, this is perhaps going to be a way to help say goodbye to Natasha while not re-treading the same retro ground as, say, Captain Marvel in the 1990s.

A 2017 setting keeps things relatively fresh (everything post-Civil War is relatively uncharted territory in terms of what most of the Avengers-in-hiding were up to), while also being close enough to the Snap to, crucially, introduce any new Black Widow stand-ins moving forward.

Yep. All that from a car. I love the internet.

The Black Widow movie isn't the only thing to get excited about. Here are some of the other new Marvel movies headed our way.