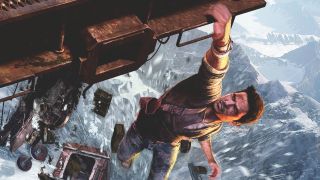 Whether they're dangling an incomplete storyline in front of us, or leaving us hanging by our fingertips over a precipice, cliffhangers form a large part of the gaming experience. These are the PlayStation games that leave us clinging on for dear life, both literally and figuratively.

Dontnod does the double with its interactive tale of time travel, which features two juicy cliffhangers. The big reveal at the end of the fourth episode has you gasping for the finale like a thirsty houseplant for water, but it’s episode three’s heart-rending twist of fate (showing the impact of Max’s meddling on best bud Chloe) that hits home the hardest.

This one hurts. Maybe not tentacle-in-Eli-Vance’s-brain hurts, but still. After that grisly ending, Valve’s left us clinging by our fingertips to the promised Half-Life 2: Episode 3 for so long – ten years, to be precise – that we’ve forgotten what it feels like to have our arms actually inside their sockets.

Waking up disorientated on a train? Just another Monday. When that train’s literally hanging off the edge of a cliff, however, it’s the makings of one of Nate’s greatest set-pieces. Duffed-up Drake scrambling desperately up carriages to safety sets the tone for a monumental adventure.

After having us introduce our fists to the Pope’s face, you might think there are no more depths of bonkers for the Assassin’s sequel to plumb. Wrong. Meet Minerva, a holographic messenger who basically blanks Ezio to address the camera head-on and task modern-day Desmond with saving the world. Bizarre.

Haven: Call of the King

At the close of this overly ambitious action adventure, alien overlord Vetch bumps off the Great King, its eponymous hero is fastened to a large boulder and... game over. Oh. We’ll probably never know what happens next as poor sales meant a sequel was never developed.

Kratos is PlayStation royalty. Of course he doesn’t do his own climbing. Hanging off the back of Earth goddess Gaia, the Ghost of Sparta ascends Mount Olympus. The situation’s like something out of a Jeremy Kyle episode: “My omnipotent dad destroyed my hometown!” Kratos vows to do the same to the gods’ gaff – and it’s roll on, God Of War III.

Amnesiac Jason Fly takes down The XX group, preventing them from overthrowing the US government. The party’s crashed, however, when
our boy gets caught by the murdered president’s brother – and apparent coup ringleader. Cue dramatic trumpets and a big “To Be Continued...” comic panel.

Beyond Good and Evil

Photojournalist Jade isn’t all she seems. At the climax, she faces off against the DomZ High Priest – only to discover she’s a vessel for a mysterious superpower. But what it is remains unknown, and a post-credits scene shows a DomZ spore growing on Pey’j’s hand... About that sequel, Ubi...

John Marston’s the name, roping and hanging varmints is his game. At least it is if you’re clever about it: using your lasso, you’re able to drag outlaws by the neck behind your horse. Ride up to a cliff, then swing your victim over the edge to watch them dangle to blue-faced death. Now that’s what we call a cliffhanger.