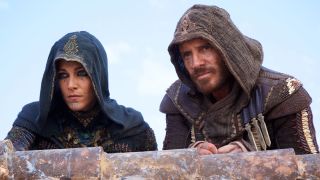 Yes, you did read that right. Or, more appropriately ‘Si.’ All of the historical sequences of the Assassin’s Creed movie have been shot in Spanish. While the split between history and modern day is reversed in comparison to the games and there’s more in the 21st century than the 15th, this is still a big surprise. Hello, subtitles.

“I just love the fact [production company] New Regency embraced it,” director Justin Kurzel explains in the new issue of Total Film magazine. “We did play around with English as well, but it was really obvious what you wanted as soon as you went back and started speaking beautiful Spanish. It really adds an exoticness and richness to the film.”

The games have sometimes had an almost comedic approach to accents, especially with the cockney sounding guards stalking the streets of French Revolution Paris. Italian Ezio Auditore too has always had a, well, questionable accent but it looks like Kurzel is focussing on realism for far more than just combat.

The historical sequences, including a dramatic flaming scene where the Assassins are almost burnt at the stake during the auto-de-fe, are packed with painful looking hand to hand combat. Add in the very real wire free eagle dive I watched on the Assassin’s Creed movie set in Spain and there’s a realism here that no one could have expected. The movie is also currently influencing the dev teams as it's been revealed that the Assassin's Creed movie's robot claw animus  might end up in the games.

You can read the rest of the interview with Justin Kurzel along with stars Michael Fassbender, Marion Cotillard, and Jeremy Irons in an exclusive Assassin’s Creed feature in the new issue of Total Film magazine. Pick up the new issue out on Friday or subscribe so you never miss an issue.