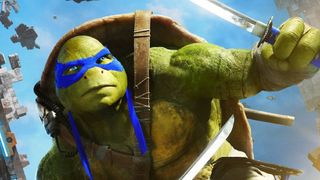 Teenage Mutant Ninja Turtles: Out of the Shadows is going for a bit more of a campy cartoon vibe than its 2014 predecessor, and that means more screen time for our reptilian heroes, as well as more jokes and brighter colors. It's a philosophy you can see reflected in new posters released by Paramount, showing off each of the turtles individually before bringing them together into one big splash art:

You know, in motion, the live-action Teenage Mutant Ninja Turtles look pretty good, and the action seems fun. And I admit, I've laughed a bit at the latest trailers. But I gotta say, these new Teenage Mutant Ninja Turtles: Out of the Shadows images are kinda freakin' me out. I'm pretty sure that when I looked into Michaelangelo's cold, soulless eyes, I saw how I'm going to die.

We'll see if the prophecy comes true this June.

Directed by Dave Green and starring Megan Fox, Stephen Amell, Will Arnett, William Fichtner, and Tyler Perry, Teenage Mutant Ninja Turtles: Out of the Shadows is released in UK and US cinemas on June 3, 2016.