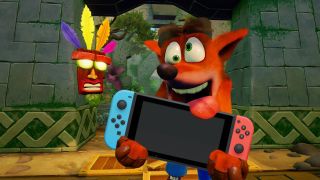 The next Super Smash Bros. Ultimate character may be another beloved platforming mascot from outside of Nintendo. After adding Banjo and Kazooie to the game in September, it looks like Nintendo could kick off its second Fighters Pass with good ol' Crash Bandicoot. It's just a rumor for now, but it started from a source who is on a solid run of Smash-related predictions recently.

The leaker, an anonymous person going by MandyCan on Twitter, first tweeted that Crash would come to the game after the first Fighters Pass concluded.

So far, so potential wish fulfillment. Throwing out potential crossover characters for Super Smash Bros. is a fine old tradition. But they sent the above Tweet out after correctly predicting that Byleth from Fire Emblem: Three Houses would be the final challenger of the first DLC season back in October, almost two months before Nintendo made it official.

Betting on Smash Bros. adding the main character of the latest big Fire Emblem game is, on its own, pretty safe, since adding Fire Emblem protagonists is like a reflex for Smash at this point. But MandyCan also correctly predicted the date of the Super Smash Bros. Direct presentation where Byleth was announced. All of this is to say that, yes, the Crash Bandicoot prediction could just be an optimistic guess meant to get people excited. But we have more reason to believe MandyCan than that one kid in the cafeteria who kept insisting that they're gonna put Kratos and Master Chief in Smash Bros.

Byleth will be released on January 28, and if this leak is right, we won't have to wait too much longer for the first word on Crash in Smash.

Find more to look forward to in our list of upcoming Switch games for 2020 and beyond.