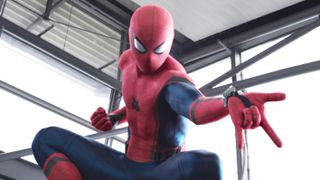 Guardians of the Galaxy featured two separate scenes featuring Chris Pratt, AKA Star-Lord, throwing some shapes – and in a direct (and genuinely funny) response to the ending of that film, new Spider-Man Tom Holland has challenged the Guardians leader to a dance off.

The move came after a meme did the rounds combining stills from Guardians of the Galaxy with images taken on the set of Spider-Man: Homecoming, which is currently being shot in New York.

@prattprattpratt it's on! Well done to whoever made this 👍🏻

Holland shared the meme on Instagram, calling out Pratt by his Instagram handle (@prattprattpratt) followed by the caption, "It's on! Well done to whoever made this.”

While it might not happen in-character, the idea of Holland and Pratt pulling a stunt like this isn’t that far-fetched – Star-Lord (and therefore Pratt) is already confirmed for 2018 release Avengers: Infinity War, with Holland’s Spidey also heavily rumoured. Filming of that flick begins in November, so expect the social media stakes between the pair to be upped again as Christmas approaches.