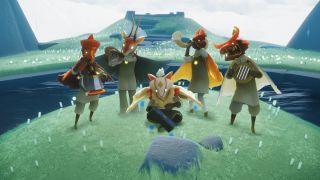 The next game from the creators of Journey is finally, really out, and you can play it on iPhone and iPad right now. I can't blame you if you've forgotten about Sky: Children of the Light being a timed iOS exclusive, or if you'd never even heard about it, since the game was announced back in 2017. You should start catching up now because Sky looks consummately lovely. It's free-to-play as well, so you don't have much to lose by giving it a try.

Sky is a third-person adventure with seamless multiplayer; you can link up with friends or meet "like-minded players" to explore its world above the clouds (or to just sit around and play your little instruments together). You could get pretty good at jumping in Journey, but Sky straight up lets you fly between its many floating islands as you explore at your leisure. You can hold hands with your friends as you soar through clear blue skies or slide down snowy peaks in solitary expeditions. While Journey was a single, set experience, Sky will expand over time with more places to explore and seasonal events.

Like the rest of thatgamecompany's output, the appeal of Sky is kinda hard to convey succinctly. Check out this extended gameplay video if you want a better idea of how it plays.

Don't be surprised if you run into other people who seem like they've been playing for a while. Sky officially came out today, but it's been in various states of soft-launch since late 2017. This is also a soft-launch in a way, because Sky is still "coming soon" to Android, Apple TV, consoles, PC, and Mac.

Stay tuned for all the big announcements this weekend  with our San Diego Comic-Con 2019 schedule.