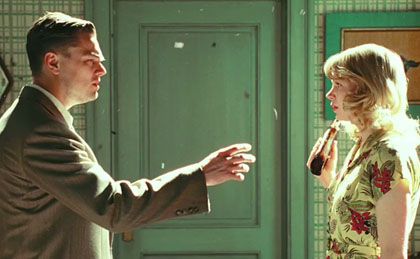 A ferry emerges out of a Stygian murk so impenetrable it might well be taking Orpheus to the Underworld. On board are Teddy Daniels (Leonardo DiCaprio) and Chuck Aule (Mark Ruffalo), two US Marshals heading for an Alcatraz-like islet off the coast of Massachusetts housing a hospital for the criminally insane. Their objective? To investigate how a multiple murderess (Emily Mortimer) managed to escape from a locked room without anyone noticing. Yet this is more than just an assignment for Teddy, an ex-GI tormented by memories of liberating Dachau nine years earlier and of his wife Dolores (Michelle Williams), who died in a suspicious apartment fire. It’s also a cue for revenge and the start of four days of reckoning that will force him to face secrets buried in his past and locked in his subconscious.

So begins Shutter Island, an impeccably assembled genre thriller from Martin Scorsese that lets the Oscar-winning filmmaker pay painstaking homage to the Hollywood film noirs of the ’40s and ’50s. Laura, Kiss Me Deadly and Out Of The Past are some of the titles it recalls, along with more recent brain-scramblers like Memento and The Usual Suspects. There’s also a sizeable nod to Shock Corridor, Sam Fuller’s 1963 loony-bin exposé, not to mention numerous stylistic lifts from Hitchcock, Fritz Lang and The Cabinet Of Dr Caligari.

Yet Marty does not simply tread well-worn ground. He negotiates it anew, like an expert cartographer mapping land thought explored and finding fresh formations in the process. Early in the film, a delusional patient is celebrated for possessing an “elaborate fictional structure”. That’s the least that can be said of this faithful adap of Dennis Lehane’s 2003 bestseller – in which each component of its labyrinthine plot interacts flawlessly with its neighbours en route to a rug-pulling reveal so fiendish it could have been cooked up by Keyser Soze himself.

It’s not so much the climax that satisfies but the journey towards it, writer Laeta Kalogridis artfully signposting each stage in Teddy’s odyssey with new characters armed either with shattering revelations or obfuscating misdirection. Jackie Earle Haley pops up as a Gollum-esque patient, hideously disfigured by a mystery assailant; Patricia Clarkson is discovered inside a cave, imparting information from behind a flickering flame like the Delphic Oracle; while Ted Levine appears as a warden with a penchant for spiritual philosophy. (“God loves violence!” he grins. “Why else would there be so much of it?”) Ben Kingsley and Max von Sydow play doctors on either side of the healthcare debate – the one backing sophisticated therapy and meds, the other preaching a rigid regime of straitjackets, manacles and transorbital lobotomies.

Admittedly some of the detail is little more than window dressing – references to clinical experiments funded by the House Committee on Un-American Activities, for instance, or a ferocious storm that is pure Agatha Christie. Yet this is amply counterbalanced by some eye-bulging set-pieces, notably a dazzling tracking shot that puts you in the crosshairs of a firing squad as they massacre a platoon of death-camp Nazis. There’s also a series of haunting dream sequences that see Williams soaking wet, caked in blood or dissolving into ash in DiCaprio’s despairing arms.

Sporting a ferrety moustache and what he freely admits is “one fucking ugly tie”, the actor invests his fourth collaboration with Scorsese with an intense performance fuelled by barely contained rage. DiCaprio’s Teddy is a man on a mission who’s also on the edge – a seeker of the truth who refuses to turn back no matter how dark the shadows that await him. Some might feel Leo’s work is rather one-note, especially compared to the subtle mix of compassion and menace that Kingsley brings to his role or the watchful geniality Ruffalo lends to his. But that would be to downplay the skill with which the star negotiates his character’s mounting paranoia as he comes to suspect he’s a rat in a maze.

Combining expansive surveys of the hospital’s bleak environs with claustrophobic forays into its dimly lit interiors, DoP Robert Richardson gives a depth and drama to the images that are complemented throughout by Thelma Schoonmaker’s smart and intuitive editing and Dante Ferretti’s superior production design. And if the music strikes a discordant note – the decision to knit a score out of fragments of work by an assortment of composers (among them Brian Eno and Krzysztof Penderecki) results in a fractured aural landscape – it is at least fitting. Impressive.