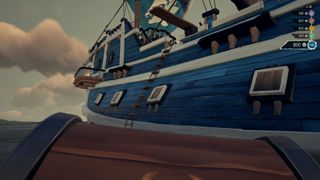 The new Sea of Thieves Sea Dogs mode sees you battling other player's ships to secure treasure in a new mode called the Arena. You can score points from killing the opposition, sinking their ships and grabbing the treasure. So kind of like deathmatch meets capture the flag mode for Sea of Thieves.

Because it's completely new, though, with a different pace and objectives, a Sea of Thieves Sea Dogs guide will be helpful if you want to form some winning strategies for its land and sea based battles. These tips should help you win and reap the rewards of doing so.

The best way to score points

The Arena’s leaderboard operates on a points-based system, with the winners being the team with the most points at the end of 24 minutes. You score 5 points for killing another pirate, 25 points for hitting an enemy ship with a cannon ball, 100 points for digging up a chest, and 1,000 for turning a chest in. However, if you sink at any point, you will lose 1,000 points off your score (fortunately, there are no negative scores).

What all of this means is that you should prioritise two things above all else: turning in chests and ensuring your ship remains afloat. The best way to do this is to keep your ship moving at all times and head for the islands with treasure on them (be warned though, everyone has the same maps). This way you can send one or two of your crew onto the island to dig up buried chests, while still having some crew aboard to steer and repair.

Collecting chests and where to turn them in

Once you have a few chests dug up, it’s time to go back to the island and collect them. Communicate with your crew and arrange a pickup spot. If the island is large, use your compass to pinpoint the exact location for the collection and have your ship drive past slowly, with at least one crew member watching the ladders for enemies attempting to board.

Once the loot is within sight, use the harpoons to grab it, get everyone back onboard, and then continue on to the Sea Dog’s ships to turn it in. These are the ships in the centre of the map with red flares coming off them. Depending on where other ships are, you can either anchor if you’re feeling comfortable or have two players jump off to hand in and keep the ship moving. Bring up the map wheel, then head on to the next island and repeat this routine.

Another huge part of the arena is the ship to ship combat. For this, there are a few pieces of advice that you can abide by to put yourself at an advantage over your opponents. When engaging a ship, for instance, have one member of your crew aim for their cannons first. This way you will hit the opposing team off their cannons, potentially grabbing an easy kill and making sure they won’t be able to return fire.

While you’re doing this, have another player aim below the water line and at other destructible areas like the mast, wheel, and anchor, while someone attempts to board to protect the damage you’ve wrought. All of the players remaining on the ship should always be prepared to perform additional duties: patching up holes, watching ladders, and steering if need be. Call out to your other crew and try to coordinate your actions as best as possible.

Bonus tip: If you’re chasing an enemy ship at any point, you can also use the harpoons to close the distance. Just be sure everyone your crew is ready for the scrap before engaging in battle.

The days of double-gunning are long over. Now it’s much wiser for you to equip a loadout with a sword and a firearm. Otherwise, you’ll constantly be at risk of running out of bullets until you find an ammo box to reload. Here’s a quick rundown on the firearms in the game to help you decide what weapon is best for your playstyle:

The Blunderbuss – Great for close range encounters, but practically useless at a distance. Excellent for killing pirates attempting to board, but will leave you vulnerable to anyone with a longer-ranged weapon.

The Eye of Reach – Better for firing at longer range. Requires you to aim down sights to fire accurately. Perfect for picking off crew on approaching ships.

The Pistol – A perfect median between the Blunderbuss and The Eye of Reach. The Pistol usually takes two shots to finish off an enemy player, and is especially good for beginners.

One more area of combat that’s especially useful to know is how to wield your sword properly. The sword combat in the game may appear simple at first, but there’s a lot of nuance that often goes undiscovered by players.

For instance, if you hold guard, lunge, and then press jump at the exact moment you thrust forward you can perform a special elongated jump attack. Also, should you hit anything during a basic lunge, such as the decking of a ship or an enemy player, then quickly bunny hop (guard and jump) immediately afterwards, it will significantly reduce the cooldown that occurs when you land.

In combat, you’ll want to use these sword lunge techniques in narrow spaces, such as below deck or in the captain’s quarters, or whenever you’re given a gap between yourself and your opponent. Everywhere else, you’ll want to use the standard swing attack. The swing attack does significantly less damage than a lunge, but can help you finish off a pirate whose health is low. Just make sure not to swing and miss your target, as there is a two second cooldown timer after failing to land your attack.

As for defending, always make sure to raise your sword to block whenever you’re being attacked, and if an enemy lifts their sword to the side of their head to lunge, hold down guard and bunny hop to either side. This should get you out of the way of their attack and give you the opportunity to punish them, while they’re recovering.