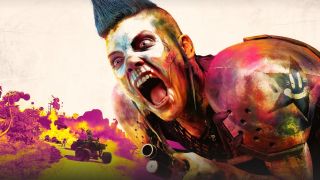 Rage 2 looked great during the Quakecon keynote presentation the other week, and I can vouch that it still plays just as well as it did when I first went hands-on, just before E3. But, for all that Quakecon is Bethesda’s biggest event of the year, there didn’t seem to be a huge amount of new info on Rage 2. That does, however, only the case if you just stuck to the keynote.

Toward the end of the week, there was a smaller panel, dedicated 100% to Id Software and Avalanche Studios’ ultra-violent, day-glo, apocalyptic party-simulator sequel, and although a much lower-key event, it brought with it more than a few interesting news nuggets. The panel wasn’t broadcast, but I was there, ready to record the whole thing and smuggle out its facts. So I now bring you those facts. And I start with the knowledge that…

You can drive airboats

“We have this philosophy in our company that if you can see it, you can go there, and if you go there and poke it, it will react.” That’s the Avalanche studios mantra, as explained by Rage 2 game director Magnus Nedfors, and while it starts in the realm of geography, it stretches to vehicles as well. “If it has wheels, you can drive it”.

But it now turns out that this doesn’t even end with wheels. Showing off a new, boggy environment via concept art (“This is a toxic slime swamp. And I love those”), Nedfors was asked if an airboat in the foreground was drivable, and not just a bit of evocative scenery.

“Yes, of course”, came his emphatic answer. “You can drive the hell out of that airboat”

JK Styles and Mutant Bash TV are back (but massively evolved)

The original game’s Mutant Bash TV challenge arenas were one of its trademarks, alongside ebullient commentator JK styles. And while circumstances have changed (“Sometimes, when 30 years have passed, and there’s a huge war, people disappear. And that’s what happened to JK Styles”), both will return to Rage 2, at least in spirit.

Mutant Bash TV is back in an upgraded, evolved form, and although lost and very probably long-dead, Styles’ presence will still be felt throughout. He’s now, in cartoon form, the show’s mascot, and exists throughout every facet of Mutant Bash’s imagery. He’s “the Ronald McDonald of killing mutants”, appearing everywhere from stage furniture to the bulbous mask-heads worn by the show’s go-go dancers.

Yeah, it turns out that Raine’s efforts to violently reduce the mutant threat backfired. After killing "billions of mutants" in the Mutant Bash TV arena, it turns out that he became rather too effective a figure of fear. Now, 30 years later, although he’s missing amid a great many stories and legends, Raine has become mythologised as the mutants’ death-god.

The upshot? There are now statues to his terrible power out in the wasteland. Mutants haven’t relented in their attacks on humans, but rather upped them, dragging their victims to these death-pit locations in order to sacrifice them, hoping that this will appease their god and persuade him to pass them over. So yeah, long-story short, attempt to handle diplomacy via mass-murder, and you’ll likely get the opposite of what you wanted. Who knew!?

There are Nazi sci-fi Samurai and sexy pirate hedonists

We also got a closer look at a couple more of Rage 2’s enemy factions during the panel. Most of the game’s demos and promotion so far have focused on the anarchic Goon Squad, but they’re only one of several very different groups with radically varied ideologies and fighting styles.

Take the Immortal Shrouded, for instance. A regimented, “military/fascist” organisation with a major focus on discipline (be that toward themselves or innocent bystanders), they’re described as having echoes of the Bushido code, albeit in a deeply twisted capacity. And that parallel follows through into their weapons and fighting style. Masters of electrified swords and cloaking devices, they sound part-samurai, park-ninja, all uptight, apocalyptic jerk. They couldn’t be more different from the Goons.

And then there’s the River Hogs. A group of swampland survivors, they’re a hedonistic bunch (“They’re feel-good crew. They like to feel good”, explains Nedfors), living a life of piracy, trade, invention, and highway crime. Also, outfits with open asses, in some cases. They live near returning character Dr. Kvasir, but apparently he doesn’t see them as too much of a threat. “They’re the kind of group that will leave you alone as long as you leave them alone, or unless you have something they want. But they want a lot of stuff.”

There’s a monster truck called the Cok Rocket, and it’s so powerful that Avalanche had to change the camera system

“When the guys first put it in”, explains Id Software studio head Tim Willits, “they were like ‘Hey Willits, you got to check out the… the… [laughs]. So I hit boost, and the fire was filling the whole screen. It was all fire. And I was like, [gleeful yell] FIIIIIIIIRRRE! And then we had to do some camera adjustments on the, er… Cok Rocket.”

According to Nedfors, driving the Cok Rocket is so much fun that it’s “a game on its own”. This thing’s going to be iconic.

Asked via Twitter whether Rage 2 would accommodate this generation’s most fashionable (and creatively worthy) game feature, Nedfors confirmed:

“Yes. We will have photo mode. We will have all the fancy stuff where you put labels on, and you can write your messages, and do everything like that. You can create your own images, and share them with other people.”

More than any other upcoming game, Rage 2 feels like it demands a photo mode. Those ludicrously beautiful, neon-drenched vistas are real ‘Stop, zoom, and look’ material, and between Avalanche’s talent for explosions and the chaotic slapstick of Rage 2’s combat, this thing is guaranteed to throw up some beauties.

Wellspring is back, but it’s changed

The original game’s first big town still exists, and you will visit it in Rage 2.

“But it’s changed”, explains Willits. “What’s really neat is that for those of you familiar with the original game, it’s definitely new, but there’s some signature architectural pieces – and even signature landscape pieces – where you’re ‘Oh, check that out!’ So it’s a lot of fun even for me to go through these new environments all ‘Oh, I remember that!’

“If you’ve never played the original, you’ll still find it beautiful, and wonderful, and amazing, but if you did, there’s some hints and throwback and imagery that will remind you of the original as well. So yes! Wellspring is back.”

There’s a “Willits Switch” cave that changes the time of day, and everyone but Tim thinks it’s stupid

Yep. There is no good reason for this, except that Id Software studio director thought it was a cool idea, and no-one stopped him. On reflection though, it is - through its pure, gleeful absurdity – a really cool idea.

“Because the world is dynamic the time of day changes, and the weather changes”, Willits offers, while justifying his inspiration. “So one of our producers works at [Id owner] Bethesda, and I work closely with him and we work with the Avalanche guys. So I called him up and I was like, ‘Hey, I've got this idea. I want to have a little secret cave somewhere in the game that you go in, and there's just a switch. And you throw the switch and it changes the time of day’. And the guy's like, ‘That's the stupidest thing ever.’”

But Avalanche made it anyway. Tim has but one request of you, in exchange for this gift. “So if you find the switch in the game somewhere, that's the Willits Switch. And [when you do find it,] say ‘This is awesome’, because so far, I've only heard, ‘This is really dumb.’”

The original Rage’s ending was… well it wasn’t even really an ending. The game just stopped. Protagonist Nicholas Raine fought his way to the headquarters of the oppressive Authority government, raised the buried Ark cryo-chambers containing his would-be compatriots in insurrection, and then the credits rolled. That was it. The game just stopped.

Understandably, people were furious. And they stayed furious for a very long time. Willits, having taken a lot of flack for that conclusion, is adamant that a) things are going to be better this time, and b) he’s got himself covered. Recounting his last trip to Avalanche’s studio in Sweden, when the team was working on Rage 2’s ending, he tells us,

“Okay, so when we were working on Rage 1, we were in a room, and everyone was like ‘This is fine, this is good’, and then [after the backlash] they were all ‘Eurgh, that was Willits’ ending’. So I gathered everybody up and I took a selfie, and now it’s like ‘All these people have agreed this is going to be an awesome ending’. And I emailed it to everyone. So I have proof!”

So there you go. Rage 2’s ending will be good, and if it isn’t, you can’t give Tim Willits all the blame this time. Just, you know, a chunk of it.