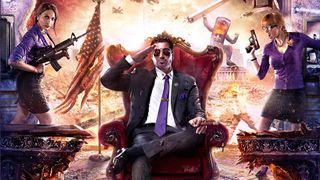 The last time we heard from the Saints gang, they were defending the White House from an alien invasion in Saints Row 4, then taking on Satan himself in Saints Row: Gat Out of Hell. The open world action franchise, with its low-grade visuals and tacky, South Park meets Archer tone, might have aged about as well as a raw chicken in a Turkish sauna, but Deep Silver promises it isn't done with the Saints just yet.

For one thing, Saints Row the Third has just arrived on the Nintendo Switch, but the publisher behind the title recently tweeted a link to the official Saints Row YouTube page, promising "exciting things ahead for the Saints, [so] you don't want to miss out!"

Whether those "exciting things" could include Saints Row 5 for the PS5 and Xbox Project Scarlett or merely a brief appearance in another Deep Silver game remains up for debate, but Volition – the developer behind all previous entries in the franchise – is currently hiring for new recruits with experience in "AAA third-person shooters" for its "next open world game."

As much as Saints Row has its problems, I've certainly prefer Volition's next title to be a sequel in that series, rather than a follow up to the so-so Agents of Mayhem from 2017. Funnily enough, we only just heard that a Saints Row movie is in the works under the supervision of Fate of the Furious director F. Gary Gray, so perhaps Deep Silver want to time a new Saints Row game around the release of its cinematic counterpart.

There's a small chance we'll hear more at E3 2019 later next month, but don't expect a guaranteed announcement. This is, after all, the same publisher that has been apparently working on Dead Island 2 in complete radio silence for over half a decade...

Read up on more of the best open world games to play right now while you wait for Saints Row 5, or just watch the video below instead.