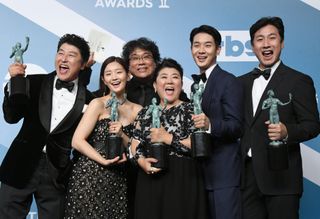 “Although the title is Parasite, I think the story is about coexistence and how we can all live together,” the movie's star, Song Kang-Ho, said during the acceptance speech, according to Deadline. "But to be honoured with the best ensemble award, it occurs to me that maybe we haven’t created such a bad movie.”

Other notable winners in the film categories included Joaquin Phoenix, Renée Zellweger, Laura Dern, and Brad Pitt, who now all look like sure-fire winners at the Oscars later this year. One group the SAG Awards honour that the Oscars do not are stunt performers – the team behind Avengers: Endgame took home the stunt ensemble award. See the full list of film and TV winners below.

Best supporting actor: Brad Pitt, Once Upon a Time in Hollywood

Best cast in a comedy series: The Marvellous Mrs Maisel

Best cast in a drama series: The Crown

Best stunt ensemble in a series: Game of Thrones