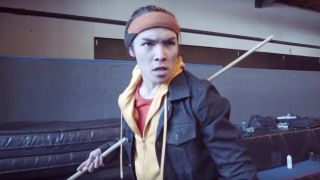 It's been almost two decades since we last saw Robin fighting alongside Gotham's Dark Knight on the big screen in Joel Schumacher's much-maligned Batman and Robin, and since then we've only gotten teases at future and past incarnations of the Boy Wonder in The Dark Knight Rises and Batman v Superman respectively.

The latter film makes it pretty clear that the second Robin - whom comic book fans will know as Jason Todd - was killed by The Joker, and although we don't get clarification in the movie it's safe to assume that Dick Grayson flew the coop long ago.

That leaves an opening for the third Robin - better known as Tim Drake - and Big Hero 6 voice actor Ryan Potter has made a case for why the role should be his with an impressively choreographed stunt video. It's even bookended with a note to Batfleck himself: "Hey Ben: Like Tim said, Batman needs a Robin".

Robin was created because DC wanted to lighten the tone of Batman's comics, and most would agree that the same could be said for the DCEU right now. My only worry is that I don't think that Zack Snyder and Ben Affleck quite nailed it with their interpretation of Gotham's hero in Batman v Superman - and judging by his recent comments, DC Films' creative head Geoff Johns doesn't think so either - so introducing Robin at this stage could be a little premature.

With that said, a new Robin fighting alongside Batman is definitely something I'd be interested in seeing, if only because we haven't seen that dynamic perfectly realised on screen yet. Drake is also the only Robin who deduces that Bruce Wayne and Batman are one and the same by himself too, and that's an intriguing plot point to build on.

If this is on the DCEU agenda then the earliest we'll see a new version of Robin on the big screen will be in Ben Affleck's upcoming solo Batman movie, likely to be released at some point in 2018.