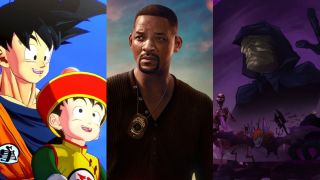 1. Conquer dungeons with the power of deck-building in A Long Way Down

A Long Way Down marries deck-builders and dungeon-crawlers and is proudly inspired by indie greats like Darkest Dungeon, Slay the Spire, and Hand of Fate. You draft and accumulate cards as you explore the dungeon, and those cards in turn affect your options and opportunities within the dungeon, both in and out of combat. Developer Seenapsis took the words right out of my mouth: this sounds like Hand of Fate but with the action sections swapped for Slay the Spire-style duels, which sounds rad. I'm digging the low-poly art, too. As deck-builders continue to grow in popularity, this'll be one to watch.

What: A Long Way Down
Where: PC (Steam Early Access)
When: January 16

For the third (and probably final) time, Will Smith and Martin Lawrence are once again ready to ask the question: what you gonna do when the Bad Boys come for you? Yes, I know it’s 2020. No, I don’t care one bit – this is going to be ridiculously dumb fun and a love letter to the mid-’90s where explosions were big, the f-bombs were bigger, and the soundtrack wouldn’t leave your head for weeks.

With it being 17 (!) years since the last installment, Bad Boys for Life heads down the tried-and-tested old-timer route, with Smith’s Mike Lowrey heading up a brash and bolshy team filled with a younger generation of cops. His ex partner-in-stopping-crime, Marcus, is on the outs with the force and is eyeing up the exit door but, lo and behold, they’re brought together one last time to take down a cartel boss. The trailer shows that the dynamic duo has lost none of the charm and chemistry that made the original movies such hits, and it should prove to be a fitting farewell to a franchise that helped kickstart the box-office action boom.

What: Bad Boys for Life
Where: Theaters
When: January 17

3.  Sex Education season 2 is here to once again remind how awkward being a teenager is

Being a teenager isn't easy. You've got puberty to deal with, and everything's just so awkward. So just imagine how much harder it would be if you're mum is a sex therapist who shows up at your school to tell your peers about sex? Well, that's what it's like for Otis, and he's going to have even more to deal with this time around. The second season of Sex Education promises to be bigger and better than the first, with all of the main cast returning along with the addition of some new characters who will shake things up at Moordale Secondary school. With new relationships kicking off, a Chlamydia outbreak, and all of the growing pains of being a teen, Sex Education Season 2 will give us a generous helping of drama and tongue-in-cheek humor for us to binge our way through.

What: Sex Education season 2
Where: Netflix
When: January 17

4. Channel your inner Goku and live out those Super Saiyan dreams in Dragon Ball Z: Kakarot

You're either a diehard fan of Dragon Ball Z, or you're not. There's no room for sitting on the fence when it comes to these ridiculously biceped warriors endlessly flexing their big DBZ energy. Dragon Ball Z: Kakarot, then, is a game for those fans, letting you relive the early days of Goku himself, as he trains to save the universe for the first few umpteenth times as a youngline. Outside the expected helpings of real-time battles, developer Bandai Namco also promises you'll be able to fish, fly, and eat your way to success too, emulating the full role-playing experience in what is sure to be one of the most comprehensive Dragon Ball Z games yet. Now, where did that hairspray get to?

What: Dragon Ball Z: Kakarot
Where: PC, PS4, Xbox One
When: January 17

5. Larry David is a forever mood on Curb Your Enthusiasm season 10

It was gone, then it came back, then it was gone again. Don't fret, Curb Your Enthusiasm returns for its tenth season, more than two years after the last episode of season nine aired. We've been waiting patiently, and we're finally getting what we deserve. You know exactly what to expect from this show, but that won't make it any less hilarious, as watching Larry struggle through the banalities of daily life in a mess of misfortune is some big 2020 energy.

HBO writes that in season 10, David's bad luck chain will start with "seemingly trivial details" like "a cold cup of coffee, a stained shirt, a missing toothbrush." From the trailer, we can see that he'll be plagued with slow walkers, bad hats, Newton's Law of Sweats, and the increasing ire of everybody around him. Oh, and don't forget the cameos. I spotted Isla Fisher, John Hamm, Laverne Cox, Kaitlin Olsen, Fred Armisen, and Jane Krakowski in one trailer, alone. Count me in.

What: Curb Your Enthusiasm season 10
Where: HBO
When: January 19