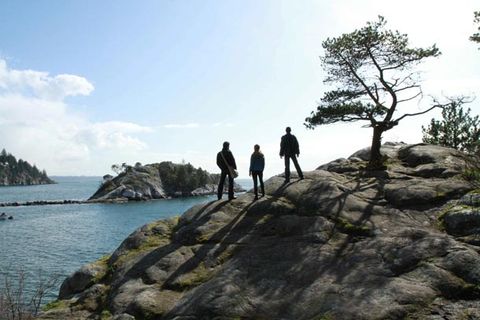 THE ONE WHERE A giant sea serpent eats a couple pipeline workers near First-Nations territory; Dylan is officially recruited to the team.

VERDICT Just remember: if you think you’re about to be eaten by a monstrous sea snake, you’re probably right. The spin-off of the British series might be set in Canada, but that doesn’t mean the creatures are any more polite. This time it’s not a dinosaur that’s terrorising Canadians, but a really big sea snake thanks to an underwater anomaly.

“Sisiutl” opens with two pipeline workers being dragged to their icy, watery graves. Right away it’s a little heavy on trying to create a suspense classic – from bobbing buoys reminiscent of Jaws to a kayaker maaaaybe about to be eaten by the creature, but isn’t – but the episode’s still loads of fun to watch thanks to the decent CGI, and the engaging moments between the characters. There’s even some humorous dialogue which was missing from the premiere. You would have to be coldblooded to not have gotten out a few chuckles during this episode, which makes it feel little less angst-driven.

The episode also has some depth as it highlights the long-time Native land dispute in the beautiful British Columbia. Linking Aboriginal mythology of the Sisiutl and “water moon” to the anomalies is smart, and should really be commended for celebrating Native culture in Vancouver. Notably, there were no Native deaths by the Titanoboa.

Although we all knew it was coming, the team officially gains a predator control expert as Dylan decides after much contemplation to ditch her old job of protecting people from bears and cougars, for saving the world from a dino invasion. Now that she’s on the team there’s a good chance for romance between her and Evan – he’s gorgeous, she’s gorgeous, it just makes sense – with the chemistry between the two already there just two episodes in. Even Mac can’t help but make a jab to Evan about it, but he just blushes and then gets back to business. But don’t forget that he has his wife’s death to pine over before he can move on to a new sweetie. Let’s hope Dylan doesn’t get eaten… So far it seems that no character is safe from becoming a chew toy.

Primeval: New World might be more serious and more character drama based than its quirky and lighthearted predecessor, but it can still be watched and enjoyed by the whole family. It’s a shame dinosaurs are extinct and unable to see how popular they are with toddlers and adults.

CREATURE OF THE WEEK The Ogo Pogo! Just kidding… The creature is identified by the team to be the Titanoboa.

DID YOU KNOW? In native legend, the Sisiutl is a two-headed serpent that possesses shape shifting abilities and symbolises protection, power, and revival. Looking into a Sisiutl's eyes would turn a person to stone.

BEST LINES
Mac: "Do you think sea monsters like English food?"
Toby: "No one likes English food."
Mac: "That's a comfort, I guess."