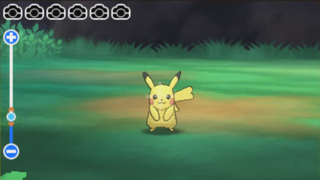 We'll probably never get a Pokemon Snap 2, but Pokemon Sun and Pokemon Moon will have arguably the next best thing: Poke Finder. This new feature lets players zoom into a first-person view in specially designated areas, where they'll be able to look around the environment and take pictures of pokemon in the wild.

You can see the concept in action starting at 2:10 in a new trailer, released earlier today:

There's lots more to unpack in this new video, including even more new Pokemon, the introduction of The Aether Foundation - a group of scientists dedicated to Pokemon research - more Team Skull goons, and whatever these "Ultra Beasts" are. But I think we can all agree we'll be spending most of our time trying to photograph Pikachu being cute when Pokemon Sun and Moon launch on November 18.