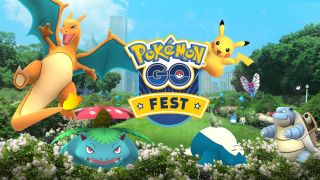 Whether you're still playing Pokemon Go a year later or if you deleted it off your phone months ago, you might be curious as to just what's going to happen at the upcoming Pokemon Go Fest in Chicago. On July 22, players from around the world will gather in Grant Park to learn more about the future of the game and participate in special challenges. Now here's the really good part: even if you're not in Chicago at the time of the festival, you can still benefit from it and receive some nifty bonuses.

Here's how it works: during Pokemon Go Fest, players in Chicago will have three "Challenge Windows" (11am - 11:30am, 12pm - 12:30pm, and 3pm - 3:30pm, all Central timezone) to catch Pokemon, with each type corresponding to a different bonus. For example, catching Fire types will result in a candy bonus, while catching Water types will result in an XP bonus. These bonuses don't just apply to those attending in-person; they'll be applied worldwide.

At the same time, players from around the world will also want to log on and participate, because if those not attending Go Fest in-person catch enough 'mon, it'll extend whatever bonuses are unlocked by up to 48 hours. And if the worldwide Pokemon Go community catches enough Pokemon during these Challenge Windows, Niantic will unlock a special "Mystery Challenge."

The Mystery Challenge (please be Legendaries, please be Legendaries) will only be available to those in Chicago, but if that group of players completes it, another unspecified reward will be unlocked globally. It's all a little complex, but basically everyone gets to pitch in, and everyone gets to reap the rewards. Hopefully they're worth the effort.

And don't worry, EU players, you get something really cool that the rest of us don't: a Pokemon Go version of the Safari Zone. These special events will be hosted at select Unibail-Rodamco shopping centers in Copenhagen and Prague on August 5, Stockholm and Amsterdam on August 12, and Oberhausen, Paris, and Barcelona on September 16. Visit the aforementioned locations on the correct day and you'll be able to catch Pokemon never before seen in Europe, as well as take on unique Raid bosses.

Given the disappointing nature of the Pokemon Go 1-year anniversary event (seriously, a $10 item in the shop and Pikachu wearing a hat?) I'm okay with treating this as the real treat to thank players for sticking around.