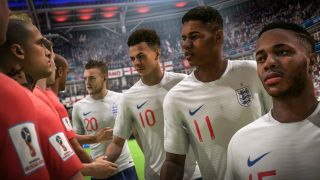 This year’s official FIFA World Cup videogame has been confirmed for a release date of 29 May – and, breaking with convention, it’ll be a free expansion to FIFA 18 rather than a standalone game.

As with EA’s previous major tournament tie-ins, it boasts all the real stadia from the greatest show on turf, meaning 12 new venues in which to go head-to-head online and off. Kits and players from all 32 qualified teams are promised, although this is an area where the game loses a bit of depth compared to its predecessors; while you can customise World Cup groups before kicking off the tournament, the team list of non-qualifiers is limited to those already in FIFA 18. That’s good news for Italy and the USA, but means no place any more for minnows such as Vanuatu and the Cook Islands.

Inevitably the full finals tournament is fully playable, though it’s the expansion’s approach to Ultimate Team which is likely to garner most discussion from the series’ notoriously hardcore fanbase. Like in 2014 – and as discussed in GR’s recent World Cup 2018 wishlist – World Cup Ultimate Team is its own bespoke mode, in which you can build dream teams of players from all 32 qualified nations. New Icons are promised, with the chemistry system tweaked so you need to link players according to nationality and federation rather than club and league.

The big news all FUT fans have been waiting for: every standard or premium pack purchased in World Cup Ultimate Team gives you a free pack of identical value for standard Ultimate Team. Sweet.

Also promised as part of the expansion are an influx of new Team Styles, ‘immersive atmospheres’ right down to authentic sun positions for each stadium (before you scoff, that’s pretty cool attention to detail), and a fresh ‘Real Player Motion Technology’ animation system. I’ll have more thoughts on all of the above when GR gets to go hands on with the mode later this month.

FIFA World Cup 2018 is available on PS4, Xbox One, Nintendo Switch and PC as free FIFA 18 DLC from 29 May. Already looking ahead to next season? Then check out 11 changes FIFA 19 needs to make according to fans.