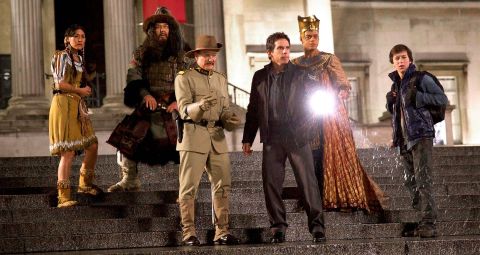 A PHAROAH TO REMEMBER...

After two middling installments, the third Night At The Museum is finally one to remember – though not perhaps for the reasons Ben Stiller and director Shawn Levy might have hoped for when they began shooting their London-based trilogy-closer last February. Since then, of course, we’ve bid farewell to both Mickey Rooney and Robin Williams, lending a poignancy to proceedings that, if unearned, still makes for a more touching finale than fans of the film’s 2006 and 2009 predecessors may have been expecting.

There's also an element of genuine jeopardy this time around, a weird “green rust” on the series’ Egyptian relic-slash-MacGuffin threatening to rob it of its exhibit-animating powers. That’s bad news for Williams' Teddy Roosevelt mannequin, Owen Wilson’s miniature cowboy and the rest of Stiller’s nocturnal buddies, though not for a series that benefits hugely from a plot-mandated change of locale, a new (British) museum and a fresh bunch of waxworks for night-owl Larry to hang with.

Ok, so we could have done without Stiller’s caveman doppelganger ‘Laaa’. But this is more than compensated for by Dan Stevens’ Lancelot, a swaggering newbie straight out of Python with a Buzz Lightyear-like aversion to admitting he’s not real. The scene in which he gatecrashes a revival of Camelot is a particular hoot. But the most inventive sequence has Larry and Teddy plunge into an MC Escher painting, an interlude so dazzling you can almost overlook the weeing monkey.

Throw in Ben Kingsley as a Pharaoh, a giant serpent and some living Elgin Marbles and this is a surprisingly decent send-off for a saga that’s taken a while to come to life. One question though. Is it a legal requirement that every montage of the English capital be scored with ‘London Calling’?