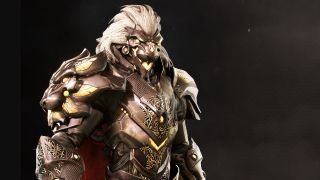 A fresh batch of wallpapers have arrived for upcoming PS5 game Godfall, and they give us a unique look at the action RPG's trio of playable characters.

Available to view and download on developer Counterplay Games' website, the wallpapers are rendered in a dazzling 3840x2160p 4K resolution, each providing an up-close and personal look at Godfall's neo-medieval warriors.

We've seen plenty from the game's main mascot character – the fella with the lion mask – but this is our best look yet at both the Valkyrie knight and white armoured warrior, whose more slender physiques suggest a nimbler in-game combat style.

Big in 2020: Godfall is the first confirmed PS5 game, and it's got Destiny, Diablo, and Borderlands in its sights

All three of these character types, which are fully customisable depending on your playstyle in the game, previously appeared in the Godfall reveal trailer, but these up close and personal set of stills represent just one more glimpse into the kind of forensic detail we can expect from the next generation of games.

Godfall has also been announced as a PC title, available via Epic Games Store when it releases later this year, but no word yet on whether Counterplay's "looter-slasher" will be making its way to the Xbox Series X, when Microsoft's own next-gen hardware also launches in the Holiday period.

In other next-gen news, another third-party title - Outriders - has also confirmed it'll be hitting PS5 and Xbox Series X in 2020, while Ubisoft has confirmed that PS5 backwards compatibility will run "almost all" PS4 games. For all the latest stories around the future of PlayStation and Xbox, stay tuned to GamesRadar+.