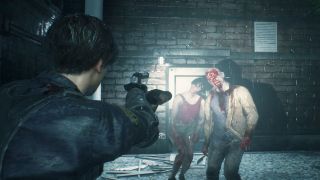 Netflix has published – and then deleted – details of an unannounced show based upon the Resident Evil universe.

As spotted by Resident Evil Wiki (thanks, Siliconera), Netflix published the show description to Netflix's Media Centre. It didn't take long for the information to be deleted again, although – at the time of writing – the text is still available via the magic of the Wayback Machine.

"It has finally been confirmed that a Netflix adaptation of Resident Evil is in the works. Attached is a description taken from Netflix's Media Center," Resident Evil Wiki tweeted. "See also a WaybackMachine archive of the search result we took a few minutes ago."

It has finally been confirmed that a Netflix adaptation of Resident Evil is in the works. Attached is a description taken from Netflix's Media Center. See also a WaybackMachine archive of the search result we took a few minutes ago:https://t.co/sAtmqupwuV pic.twitter.com/wmPgoLtafIFebruary 7, 2020

As for the description of the show itself?

"The town of Clearfield, MD has long stood in the shadow of three seemingly unrelated behemoths - the Umbrella Corporation, the decommissioned Greenwood Asylum, and Washington, D.C. Today, 26 years after the discovery of the T-Virus, secrets held by the three will start to be revealed at the first signs of outbreak."

Admittedly that doesn't tell us much, and it's curious that this is based in Clearfield and not Raccoon City – perhaps intimating we'll be getting an original story? – but the show name, reference to the Umbrella Corporation, and an explicit mention of the T-Virus leave little room for doubt that the show will be based upon Capcom's well-storied universe.

The news adds credence to Deadline's January 2019 report that first hinted that Netflix was developing a Resident Evil-flavoured show for its subscription service.

With so little concrete information we'd still advise this rumour is taken with a giant shovelful of salt for now, but it certainly seems convincing, right? All we can do is this space...

In other spooky spin-off news, the director of the original Silent Hill movie also recently confirmed that he's returning to Silent Hill for another film based on Konami's horror series, as well as a new adaptation of the terrifying Fatal Frame/Project Zero franchise, too.

Konami isn't ready to confirm or deny the existence of current Silent Hill projects behind the scenes, but it does still have the series in mind. In a statement a Konami representative said that the company "cannot share anything at this point, but we are listening to customer feedback and considering ways to provide the next title". That official comment takes us from years of Silent Hill silence to a more optimistic "maybe it will happen?" That's definitely worth something, especially in light of the rumours that not one but two Silent Hill games are currently in development.

Take a look back at the past 10 years with our pick of the best games of the decade.