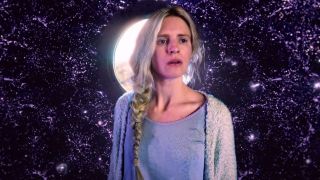 Another one bites the dust. Netflix has announced that the mystery thriller The OA has been canceled and won’t make it past two seasons.

The OA was an absolutely bonkers series co-created by Brit Marling (who also plays the main character) and Zal Batmanglij, who previously worked together on The East and Sound of My Voice. The show followed the mysterious story of Prairie Johnson, an adopted woman who resurfaces after going missing seven years prior. When she returns, she’s covered in scars and has regained her sight (she was blind before her disappearance) and refers to herself as "the Original Angel" or "OA."

While that may seem a bit baffling, that’s barely scratching the surface. The rest of the show melded together plotlines and narrative devices that included the Russian mob, resurrection from beyond the grave, dance movements that can transcend dimensions, a troupe of Midwestern high school boys Johnson gathers together, and of course, angels. Collider described season two as "an ambitious, wondrous exercise in WTF storytelling" and while it was often baffling, it enjoyed a fair bit of critical acclaim, with an 84% Rotten Tomatoes score and a 7.8 out of 10 on IMDB.

So what happened? Netflix won’t really say, but according to Variety, it did release a statement from VP of Original Content Cindy Holland that said, "We are incredibly proud of the 16 mesmerizing chapters of The OA, and are grateful to Brit and [co-creator Zal Batmanglij] for sharing their audacious vision and for realizing it through their incredible artistry. We look forward to working with them again in the future, in this and perhaps many other dimensions." That last sentence might give fans of The OA hope that Batmanglij and Marling will work together on another, in-universe project, but it could also just be a cheeky nod to the show’s ambitious storytelling.

While the streaming service is tight-lipped on viewership data, it does take it into consideration when deciding whether or not to renew a show. The past year has seen Netflix take the axe to both remaining Marvel series (Jessica Jones and The Punisher), the Cuban-American family sitcom One Day at a Time, the Drew Barrymore but a zombie Santa Clarita Diet, and the female-led animated series Tuca and Bertie, among a bunch more lost to the cost-benefit analysis.

Will we get to see a third season of the OA on another platform? Perhaps in another dimension.

We’ve got the 30 best shows on Netflix you can watch to fill the OA-shaped hole in your heart.