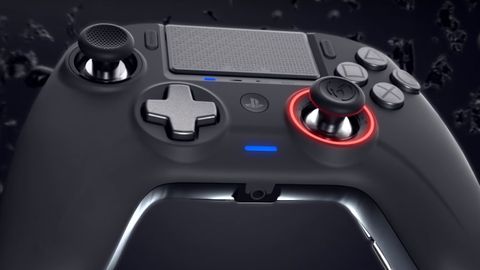 The Revolution Unlimited boasts superb customisation and feels brilliant in use. Sadly, unreliable software holds it back.

If you want to get someone on-side with a controller, let them customise the bejesus out of it. Personalisation helps you stand out in a busy market, especially when it improves a player’s performance. The Nacon Revolution Unlimited for PS4 and PC nails this in almost every respect. In fact, there’s a dizzying amount of customisation options available to you here. Although it’s not exactly cheap at $180/£150, this is a finely-tuned handset that earns its price-tag. For the most part, anyway.

Nacon have been at this for a long time, so it shouldn’t come as a surprise to hear that their latest controller is gorgeous. Its rubberised faceplate is satisfying to the touch, a ring of light around the right thumbstick glows during play, and its touchpad is etched from top to bottom with tiny PlayStation symbols (a nod to its officially licensed status, presumably). Like other Nacon handsets before it, the Revolution Unlimited is also armed with broad triggers and asymmetric, metal-necked analogue sticks. Elsewhere, 4 programmable buttons are hidden on the inner, grippy flanks of the controller; they sit pretty below an array of on-board mic/profile options. Meanwhile, a subtle gray color scheme and hard carry case establish that this is a sophisticated piece of kit. It’s an expensive controller with an expensive look.

The Revolution Unlimited isn’t light on features, either. As you may be able to tell with a glance at the back of the controller, this is about personalising your experience. Those 4 extra buttons can be programmed howsoever you choose, and (along with wired and wireless capabilities via dongle) there are three settings to work with. You can choose from standard PS4, ‘advanced’ PS4, and PC, but all have 4 customisable profiles each. As an example, the ‘FPS Pro’ mode cranks up the right stick’s responsiveness to help you aim faster. In other words, you can dictate how the controller responds from game to game. This isn’t a one-trick pony. It’s a back-flipping horse.

Better yet, these profiles can be tinkered with to your heart’s content. This is achieved through Nacon’s own software - a goldmine of options where you can influence trigger reactivity, stick sensitivities, rumble strength, and more - or via the controller itself if you’re using standard PS4 mode. While there aren’t any hair trigger lock switches on the handset and you can’t swap that d-pad, this depth of customisation makes up for it.

That’s true of the physical controller as well. To start with, you can alter the thumbsticks with three different metal shafts that allow for 30°, 38°, or 46° amplitude (e.g. how far the stick is able to move). On top of that, the heads can be removed and swapped; you’ve got a choice of concave, convex, or a mix of both.

Finally, the rear palm-rests slide off to expose a weight compartment. Nacon lets you choose between 10g, 14g, or 16g cylinders that’ll give the Revolution Unlimited the heft you want.

As for how it handles, the Revolution Unlimited is right on target. It feels great to hold, the controls are satisfyingly ‘clicky’, the sticks are weighty yet maneuverable, and the triggers hold excellent resistance. On top of that, every input gives a sense of hard-wearing quality that makes it clear this is neither cheap nor nasty. In fact, the only thing I didn’t like was the d-pad. 4-to-8 directional inputs are all well and good, but coming as a singular, connected unit like the Xbox One handset won’t be to everyone’s taste.

Something you can’t complain about is how much of the controller you’re able to personalise, though. Nacon’s software allows you to tailor your experience on a truly granular level, making the Revolution Unlimited a good fit for everything from competitive to solo games. Want to change response curves and dead zones? Have at it - you can fiddle about with each individual stick or trigger should you so choose. It’s pretty comprehensive.

Similarly, the controller’s 4 programmable buttons can become whatever you’d like them to be. They may take some getting used to thanks to their position on the inner flank of the palm grips, but they’re effective nonetheless. Being so accessible means you don’t have to move your fingers or thumbs at all, giving a split-second advantage over the competition. Because they’re also tucked out of the way, you’re not as likely to hit them by accident or during single-player games - an issue with the more common paddle system, as seen with the Razer Raiju Tournament Edition.

However, I should make it clear that I didn’t feel so positive about the Revolution Unlimited when I first got it. Namely, its pre-programmed profiles make baffling choices (I’ve yet to work out why I’d need another trigger or bumper input, for instance) and Nacon’s software can frustrating in practice. It regularly crashed on our system, was painfully slow, and slightly confused us in general. This makes it difficult to change anything. Our version also lacked printed instructions; you’re expected to jump online to find out… well, anything. That’s a bit of a faff.

Still, Nacon’s latest controller proves itself worthy once you know what you’re doing. It’s a similar price to the competition, is arguably of a higher quality, and can be fine-tuned to the nth degree. For a $180/£150 pro controller, that’s not half bad. What’s more, its software issues can be patched out or ignored once you’ve created profiles of your own. At that point, the Revolution Unlimited is allowed to shine.

The Revolution Unlimited boasts superb customisation and feels brilliant in use. Sadly, unreliable software holds it back.