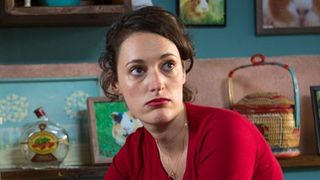 The Han Solo movie already has a whole host of well-known actors from hit and cult TV shows alike, from Donald Glover to Emilia Clarke – and it’s about to add one more to its swelling ranks if rumours are to be believed. Phoebe Waller-Bridge, star of Amazon’s Fleabag, is set to join the Star Wars standalone movie.

Variety are reporting that Waller-Bridge, who has also appeared in Broadchurch, will be a “CGI-driven performance” but “still be a significant part of the ensemble.” If it’s anywhere close to K-2SO then we’re in for one hell of a treat. On the other hand, you can’t think ‘CGI Star Wars role’ without thinking of Jar Jar Binks *shudders*

As fans of Fleabag will attest, you can expect lots and lots of Kaytoo-style awkward humour from Waller-Bridge. Her performances in the Amazon Original show has gained her acclaim from both sides of the pond, as well as being nominated for a Critics’ Choice Award.

With the success of Star Wars: Rogue One’s sweeping ensemble, expect Star Wars movies to carry this trend going forward, especially with Disney’s near-on obsession with making all of the pieces connect in some way – and it seems to be no different here.

Are you worried that, with all of these stars, (including Emilia Clarke in an unnamed role let’s not forget) that it’ll take too much attention away from the relatively unknown Alden Ehrenreich as Han Solo? Let us know in the comments!

Directed by Phil Lord and Christopher Miller and starring Alden Ehrenreich, Donald Glover, Woody Harrelson, and Emilia Clarke, the as-yet-untitled Han Solo movie is scheduled to be released in 2018.