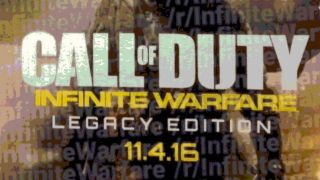 UPDATE: Infinity Ward just tweeted this. Make of that what you will...

Carefull now, as we’ve a rumour build on a rumour built on a leak but it suggests there might be a Call of Duty: Modern Warfare remaster coming with Infinite Warfare, which is potentially this year’s COD.

Yesterday, we had the very probable reveal of a new Call of Duty via a listing for promotional retail advertising. That’s looking legit. However, within hours there was the slightly less trustworthy discovery of a Call of Duty: Infinite Warfare listing on PSN. UPDATE: I've had the PSN leak/image verified by a second source I trust so Infinite Warfare is defintely a thing as far as the name goes.

Now we have a pack shot that appears to name Call of Duty: Modern Warfare Remastered as part of the Legacy Edition of the game.

I’m calling bullshit here because, A) the timing’s really suspect - two unsubstantiated leaks in short succession after the more plausible and unnamed retail listing. And, B) that art’s dodgy as all hell. Firstly the shadowy man just doesn’t look shooty enough for the series and the space helmet is very retro looking (is that two viewing windows, for example?) I’m looking right now to see if the image is from somewhere else.

Also, check the ‘May contain content inappropriate for children’ sticker in the bottom left. It’s clearly not on the same perspective plane as the cover it’s meant to be stuck on, and looks like it has a white border around where it's been badly cut out.

So yeah, it’d be nice but I’m not buying it. I mean I would buy it, I just don’t think it’s happening.