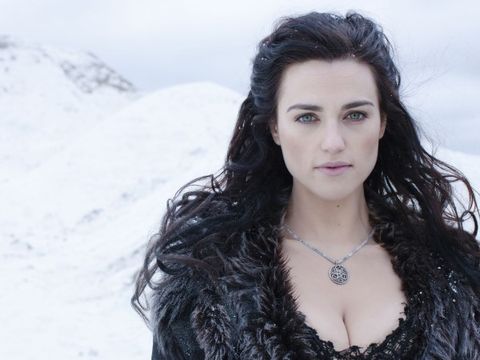 TV REVIEW Three years have passed and the enemies of Camelot are plotting...

THE ONE WHERE Arthur and Guinevere have been comfortably on the throne for three years but now trouble is brewing in the north. Sir Gwaine, Sir Percival and their men have been captured by Morgana's allies and forced to dig in ancient mines in search of a powerful "key" that Morgana believes is "Arthur's bane". Arthur rides out to rescue them but a dying druid terrifies Merlin with a vision of the final battle with Mordred...

VERDICT This series opener wastes no time getting back to the action, even if it is clearly setting up the pieces for bigger confrontation next week. A quiet, personal moment at the start gives way to a striking first shot of the main hall with its Round Table, but we actually spend very little time inside Camelot during the episode. Nonetheless it's obvious things have changed in the three years since Arthur and Gwen were married , most noticeably the royal couple's acceptance of their leadership role. Arthur is even more dedicated to his knights than before and the sense that it's a brotherhood with attendant moral obligations is often repeated; meanwhile Gwen has become a true stateswoman who's prepared to rule the court in Arthur's absence, dispensing tactical counsel, friendly advice and ruthless judgement in equal measure. This growth in character is subtle but significant and gives the story a more grown-up, responsible tone.

If anything, Merlin has changed the least since we last saw him, because his personal objectives and his place in the court are unchanged. His growing confidence is shown, though, in his quick comebacks to Arthur - and it's telling that despite Arthur's disparaging remarks, Merlin still gets to ride a horse in his entourage while many of the royal guard have to walk. Arthur's banter with Merlin comes from a place of friendship, but there's little justification for Queen Annis to turn on Merlin ("giving his other failings, he must have some talents") so it seems a bit harsh. The light-hearted sequence with Merlin's juggling trick is an odd change of pace from the danger that's gone before, but it is funny and the look of incredulity on Arthur's face is priceless.

Much of this episode is spent travelling around the fantasy landscape. While this episode lacks the huge armies and CG-enhanced battles we've seen in the past, it still hangs on to its epic quality thanks to a wide variety of locations, the plains, valleys and rock-strewn hillsides bringing to mind everything from Game Of Thrones (the frozen north!) to Excalibur and even Indiana Jones (see below). Although we see the return of people like Queen Annis and Mordred, this story broadens the legend out, taking us to previously unseen places like Ismere and introducing new druid symbols and enemy factions.

There are a couple of character reveals that, though predictable, are deftly handled. It's obvious that Sefa is up to no good when she sneaks out of the palace but it's still interesting to discover that she's Ruadan's daughter, and the conflict within her is palpable. (It's worth the audience remembering that Arthur knows what it's like to have an uncompromising father. Is this a theme in Merlin ?) And of course there's Mordred, signposted midway through in the druid's vision but nonetheless surprising when he arrives at the end, stepping into the clearing as Morgana's lieutenant and the bandits' leader.

As SFX already noted , there's a feeling here that the truly impressive moments are waiting for us in next week's episode. But there's definitely the thrill of new characters and new conflicts being established... and more questions being asked. Just what is the mystery beneath Morgana's tower? How will it lead to Arthur's downfall? Can Merlin do anything to prevent Arthur's wounding on the battlefield? What is that blue sprite Gwaine sees? Let the speculation begin in the comment thread!

LMAO Am I the only one who perceives shades of Monty Python in the way on two occasions the knights yell "Run!" when they see Morgana and her wolves?

REFERENCES Merlin 's epic scope means visually it seems to draw on a variety of screen sources - I won't mention Game Of Thrones again - but here are three cinematic sources that invite comparison: Indiana Jones And The Temple Of Doom (the slaves being forced to work in cavernous mines), Lord Of The Rings: The Fellowship Of The Ring (36 minutes in, when Arthur and Merlin hide from the riders beneath the bank of old trees, there's a whiff of Hobbits hiding from Nazgûl) and Return Of The Jedi (food being used as a forest trap to catch our heroes in a big rope net).

WHAT OTHERS ARE SAYING The Radio Times makes this comment about the return of Merlin : "It's always been classy fare, but if anything Merlin is even more confident now. Still expansively filmed and able to entice great names ... there's now more beef to the battles and punch to the humour. Not to mention some hilariously gratuitous bare-chestedness."

UNANSWERED QUESTIONS When we saw Morgana at the end of the last series, she was with the baby dragon Aithusa. Where's that gone then?

IT'S WOSSERNAME AND WOSSISNAME TOO! So many great actors with small roles in this episode, but it's worth pointing them out. Lindsay Duncan is of course back as Queen Annis. Alexander Vlahos is revealed as the new Mordred, a much-discussed changed caused in-story by the advance of three years and in-real-life by Asa Butterfield's ascension to Hollywood . Vlahos has previously been seen in The Indian Doctor , Crash and Doctors .

You'll also have spotted that Ruadan is played by the wonderful character actor Liam Cunningham . Cunningham has been in many films and TV shows, and right now he is Davos Seaworth in Game Of Thrones . Ruadan's daughter Sefa is played by Sophie Rundle , who you'll know from such things as The Bletchley Circle and Episodes .

In a brief but potent scene, The Euchdag (the glowing alien creature who Gwaine glimpses in the depths) is apparently played by the award-winning Josette Simon , famous from many shows and films, notably in our genre Blake's 7 (where she was Dayna). Although I have to admit, I struggled to tell it was her beneath the blue effects.

Lastly, let's give a round of applause for a super-brief performance by the legendary Julian Glover as the dying Lochru, the villager with the druidic tattoo. Glover has of course been in everything from Indiana Jones And The Last Crusade and Doctor Who 's "City Of Death" to The Empire Strikes Back and recently Game Of Thrones .

TRIVIA This is not Liam Cunningham's first Arthurian TV role. In 2011 he was also in the Camelot series, as Colfur.

NITPICK The Great Dragon says Lochru's prophesy means that it is Merlin and Merlin alone who can keep Arthur safe. Why would he leap to this conclusion based on Merlin's description of the druid's vision?

SLASH BAIT Gosh, where to begin? There's not much Merlin/Arthur (unless you count a little close proximity napping in the woods) but there's so much general shirtlessness you can't help but worry all the knights will catch cold - one particular scene of Percival and Gwaine sleeping side by side with very few clothes on is surely a gift to the internet. Arthur even describes the knights' relationship to each other as "more than friends, more than brothers" - so, pretty close then? Have fun with that one, slash writers. Meanwhile, Gwen and Sefa hold hands at the dinner table.

THE LEGEND The final confrontation between Mordred and Arthur, glimpsed in the druid's vision, probably refers to the mythical battle where Arthur falls: the battle of Camlann. Its earliest mention is in the 10th century Annales Cambriae which also mentions Arthur's victory at the battle of Badon 21 years earlier.

BEST LINES
Merlin: "Do you know how big this castle is?!"
Arthur: "Funnily enough, I do."

Gwen: "Respect is to be earned - it cannot be bought with blood."