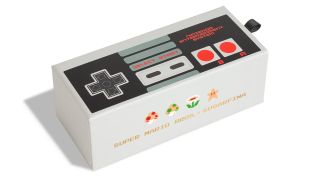 Just when we thought the beloved Super Mario Bros. franchise couldn’t get any cuter, a thing called Mario candy decides to exist, and it’s even cuter than baby Yoshi and baby Bowser combined. In collaboration with Sugarfina, a self-described luxury candy store, the Super Mario Bros. Collection is a new, limited edition line of Mario-themed candies, attractively packaged into designs inspired by the Super Mario Bros. universe.

The candies come in different highly-collectible boxes, including an NES controller lookalike, Super Mario Bros. blocks, and my personal favorite: a customizable variety box that plays the iconic Super Mario Bros. theme song when opened. Despite being something that literally nobody asked for, these adorable candy-filled blessings would surely be tasty, on-brand additions to any Nintendo enthusiast’s gaming station.

The promotional website for the Super Mario Bros. x Sugarfina collaboration is enough to sell us on at least one of their themed candy sets, featuring a wallpaper filled with pixelated Super Mario Bros. clouds, stylized text, and an NES-era Mario cursor. There’s even a Super Mario Bros. quiz where you can put your "iconic gaming IQ to the test."

Prices range from a modest $7.50 for the small boxes to $70 for the Ultimate Game Night Bundle. Do be advised that this is currently being marketed as a limited edition collection, and the Complete Collection Bundle is already showing as out of stock right now.

Nintendo already gives us plenty of reasons to spend money, but if it’s your dream to own a physical Nintendo stage that sings to you and gives you candy, then by all means dream away. It certainly wouldn't be the most anyone's paid to prove their dedication to the Super Mario Bros. name, as a sealed copy of the original Mario Bros. was sold this year for a staggering $100,000.

Get a sugar-free Mario fix with our list of the best Super Mario Maker 2 levels.