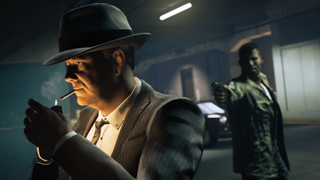 A sequel to Mafia 2 was always going to be a tricky balancing act. Less a true open-worlder, more a linear action game running through a huge, ambient film set, it was an excellent but divisive game. Some loved it for the strong narrative focus and more curated, directed gameplay its lack of distractions facilitated, while others craved extraneous hijinx and emergent carnage. But miraculously, Mafia 3 might well delight both camps. Mafia 3, you see, is brimming with wildly varied, giddily violent gameplay options at any given time. None of them, however, can be described as a mere side-quest.

It’s the new structure that does it. Mafia 3 isn’t interested in pulling you away from the nuanced, grown-up storytelling that the series is famous for, but it does want to give you a wider, co-authored path through it, by way of multiple possible, personalised routes to the next goal. As Lincoln Clay, former member of the Black Mafia and now Vietnam veteran, you’ll make your bid to wrestle New Bordeaux’s underworld from the Italian mob – the city is Mafia 3’s arresting recreation of 1968 New Orleans – by softening up each of its themed, city-wide rackets in turn, taking out the supporting bottom-feeders in order to weaken the guys up top. Once a set quota of the mob's income has been demolished, it’s time to hit a big, stand-out, set-piece mission in order to finish the job.

Along the way to each climactic bullet-spree, your route to dominance is your own to write, mission details providing not a set list of objectives, but rather a full menu of freely selectable possibilities, each of which will push you forward to a differing degree. Fancy a bit of road war? Then hit the streets to take down a few enemy supply trucks, drifting and gunning your way to success. Or if you feel like a more leisurely day at the office, feel free to track them down where they’re parked, casually rolling a grenade underneath or sniping the gas tank from afar.

If you’re in the mood for a more direct hostile take-over, there are plenty of Italian lieutenants scattered about the city, going about their business in various back-alleys and Mafia front establishments. Wade in, guns blazing, if you like. That’s a totally viable approach, and Mafia 3’s tactile cover system will serve you well if that’s the way you go. But if you take a moment to scope out the area, you’ll often find multiple angles of attack, some quiet, some loud, some a bit of everything.

You might be able to identify Squealers, the special goons who will run to the nearest phone to call for back-up as soon as the action kicks off. They can be a problem, unless of course you’ve cut the phone lines to the area before going in. You might spot explosive opportunities, heavy ordnance stashes or fuel sources that can clear multiple targets if you can find a way to corral them into position - a noise-making distraction furnished by your lieutenant Cassandra will give you a perfect set-up if you’ve accrued enough favour with her to get it, but more on that in a moment. You can tactically dismantle the entire area, or you can just take out the key target and be away, hopefully so fast that his entourage can’t catch up with you. But there’s every chance they might. There’s always an exciting dash of chaos theory to Mafia’s pre-fight planning.

In fact the really impressive thing is the way that Mafia 3 handles the changing shape of the action when things don’t go as hoped. Developer Hangar 13’s mantra is ‘no failure but death’, and within minutes I find that the feedback I get from the game’s systems compounds that philosophy every step of the way. Whatever I do, whatever changes I make to my plan on the fly, in the moment, my every action feels like the canon approach. Stealth, shooting, cover, run-and-gun, and desperate sprints to (hilariously violent) melee takedowns merge and flow together with a robust ease and zero implied hierarchy. The start of a surprise gunfight is just the beginning of an exciting face-off, not a disapproving punishment for failed sneaking. That sprint to stab a reloading goon in the face is a smart piece of improvisation, not the cowardly shirking of a duel.

It says a lot that my very first attempt at stealthy recon goes irrevocably awry when I press the wrong button and throw a grenade at a wall, yet for a few good minutes I manage to adapt and style out the uninvited battle with pure improvisation. What’s more, I enjoy it, without a single thought for hitting reset on the last checkpoint to retry in the manner I was supposed to do it. There is no ‘supposed to’ in Mafia 3.

The freedom of strategy balloons through the game, far beyond its moment-to-moment action. Those lieutenants I mentioned earlier, for instance. Lincoln isn’t going it alone in his attempt to usurp the mob. He has an unlikely council of three as back-up, comprising the leaders of New Bordeaux’s other three gangs, the Irish, the Haitians, and the rebel Italians. After taking down each racket, he’ll need to hand it off to one of them for day-to-day running, and long-term loyalty brings additional powers furnished as favours in exchange for the new business. You can unlock and upgrade a weapon delivery van to give you more options before an assault. You can call in some reserve muscle to soften up large groups and cause distractions as you sneak in elsewhere. You can tap the phones in mob strongholds in order to pick up information that might help you persuade a local boss to your side if you’d prefer not to kill him...

Once I come to terms with the full scale and scope of Mafia 3 - which takes a while, because it’s huge - I start to see disparate elements of many of modern gaming’s brightest and best come together. The tactical forward planning of Hitman’s bigger-picture strategy. The flowing stealth/action hybrid of latter-day Metal Gear Solid. The fast, improvisational gunplay of Uncharted. It all blends into an unexpected but very coherent and satisfying whole. In fact I’m still, nearly a week later, coming up with new and wildly different solutions to Mafia 3’s challenges, and kicking myself that I didn’t see them at the time. Smashing through the building site gates to flatten the first three guards with my car, before bailing out and triggering the attached C4 to take out the two at the bottom of the hill. Why didn’t I do that last time? Oh yeah, because I was stealth-killing everyone in the yard, and sniping the guys on the roof with my scoped pistol.

But for all of the above reference points, Mafia 3 is entirely its own experience, and ultimately, that’s as important a take-away as any other from this preview. For all of the expansions, and upgrades, the wildly spiralling possibilities, this is still a Mafia game. It’s still an intelligent, mature, staunchly character-driven tale, grounded in real-world grit and very human emotion. It’s still focused on delivering a startlingly evocative sense of time and place, its city every bit as intoxicating an expression of the troubled late-’60s south as its predecessor’s was of ‘50s New York and Chicago. And it will still put you through the moral and emotional wringer every chance it gets.

Those territory negotiations with your lieutenants once a racket is taken over? They swing both ways. Just try choosing between a seemingly vital bonus from Cassandra and threats of violence from a neglected Burke, when Mafia 2 protagonist Vito is in the middle, still broken and dejected from what he went through the last time around.