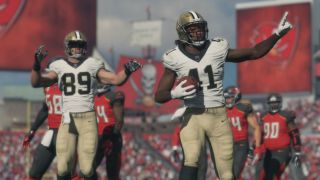 A new Gridiron season means months of uncertainty in parts of the NFL, but some guarantees for the 2018 campaign are already established. The Patriots will still be playing football come January. Hue Jackson will get through his entire range of pained expressions on the Cleveland sideline. And a new Madden will emerge during the season’s formative weeks.

There’s no Madden 19 release date confirmed as yet. Still, that hasn’t stopped fans proposing the features they’d most like to see, from essential franchise-mode tweaks to more expansive elements of Longshot story mode. Below I’ve curated the best such suggestions unearthed on official forums, social media and various other NFL-obsessed corners of the internet. And no, “just delete the Browns” doesn’t make the list. Sorry, Hue…

1. Dedicated build-up to the playoffs

Both Philadelphia and New England played scintillating football en route to the Super Bowl, matched by all manner of snazzy broadcast elements from the likes of NBC and CBS. Yet in Madden, there’s little sense of immersion as the season’s critical fixtures come into view. “I would like a screen dedicated to the playoffs once week 12 or 13 has been reached – not just for a few seconds before you start your game, as Madden 18 has it now,” writes UpNorthCatsFan on Operation Sports.

Comrade Reyes The Roof smartly elaborates upon that idea. “EA should add a playoff chase feature when teams start having a chance to clinch playoff berths, divisions, home field, etc that shows you when a team has a chance to clinch, and what they need to happen [in order to do so],” he writes. “I'm [currently] in week 17 with a one-game lead over two teams for the final wildcard spot, and I'm facing a 12-3 opponent – so I'd like to know what scenarios can get me in, even if I lose.”

An ongoing issue with online Madden, particularly in Ultimate Team, is opponents mastering three or four plays and running them over and over. Lolubuypacks from Muthead proposes a solution which would likely be complex to develop, but improve all modes over time: adaptive AI. “If the [human] player keeps using the same plays, your AI team-mates should automatically adapt after a certain amount of times. I personally don’t have too many issues with spammers, but it would make the game more exciting if people had to open up the playbook a little more.”

If that can’t be implemented, EA forumite DSyed11 champions a popular mechanic from years gone-by which really should have been restored to the series by now. “Old Madden games used to allow you to match up your best CB on the other team's best WR, and be strategic about who covers who. Madden 19 needs to bring this feature back. It’s way too easy to avoid a good corner by just putting the WR in the slot or on the other side, and the defense isn't able to adjust in any way. Make the game so defenses can adjust and it’s more of a chess match.”

It’s long been rumoured that the NFL plans to eventually award a 33rd franchise to play in London – and Madden fans feel so strongly about having this option in-game that there’s even an online petition for EA to add expansion teams as a feature. It’s actually been in the series before: if you took control of the Houston Texans in Madden 2002, you could build their roster from scratch using the NFL’s real franchise draft rules. Very cool it was too.

The tech is also readily available via Madden’s pucking good, hockey-obsessed cousin. “Madden 19 should have the customisation options you have when creating a 32nd team in NHL 18,” writes TRMJay on the official EA forums. Those options include a selection of cities both inside and outside of North America – such as Berlin and Helsinki – plus the ability to design your own mascot, and that aforementioned expansion draft. It works fantastically, and would be a natural fit for Madden – though sadly, NFL clearance is unlikely.

Wish it would throw up much more variation in the playcalling, particularly when you’re playing as different coaches. Schemes too similarFebruary 8, 2018

Would like to be able to use motion etc at the LOS more to diagnose, and maybe have a limited amount of ‘create your own’ plays per coach?February 8, 2018

This is the third year running I’ve beaten the home-field-advantage drum, and GR will continue to do so until it’s implemented. Seattle, Kansas City and Pittsburgh are famed for affecting opposition performance with noisy, raucous atmospheres, yet there’s been no attempt to replicate their effect in-game.

“I don't think Madden has ever matched the intensity and rivalry games like NCAA has, ever. Man, I really need to go back to NCAA 14,” writes TheOriginal_Frostbyt on Reddit. In EA’s fabled college series, crowd noise would sometimes make receiver pass routes go wiggly when you viewed them before the snap. ScruffMixHaha has a suggestion along similar lines: “There should be possible miscommunication with receivers when doing an audible in pre-snap in an away game. The awareness [attribute] could decide the receivers’ probability of messing it up.” For years EA has done a commendable job of making CenturyLink Field look accurate. Now it needs to make the place *feel* accurate, too.

Small details are the key to the success of leading sports games such as MLB The Show 17 and NBA 2K18 – and Operation Sports poster Reyes The Roof picks up on a critical one needed for franchise mode. “A little thing I'd like to see is the ability to retire numbers for each team. I get so annoyed when I play Green Bay and they have a kicker wearing #4. I started going through the roster of my upcoming opponent every week and changing uniform numbers for anyone that is using a retired number, or a number that isn't officially retired but doesn't get given out anymore.” No gamer should have to do that – and yes, a Packers player wearing the shirt Brett Favre made famous immediately shatters Madden 18’s illusion of reality.