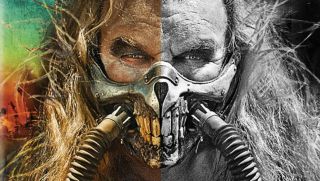 George Miller made it pretty clear that he'd have preferred audiences get to watch Mad Max: Fury Road in black and white while doing interviews for the movie, and while there were rumblings that the film could be headed back to cinemas in the director's preferred format late last year that never became a reality. Thankfully, us Fury Road fans will still get to see a monochromatic cut of the movie on Blu-Ray, and now we know exactly how long we'll have to wait for it.

Warner Bros. Home Entertainment (via ComingSoon.net) have announced that Fury Road's 2-disc Black and Chrome edition will be available on December 6, and it will include the original version of the film as well as its black and white cut with a special introduction from Miller himself.

If you're a true Mad Max completionist though you might be interested in the High Octane Collection, which will include the aforementioned Black and Chrome edition in addition to the Mel Gibson starring Mad Max trilogy and a ton of special features (including a feature-length documentary on the original 1979 movie). And just in time for Christmas too!

Mad Max: Fury Road's High Octane Collection will be available on DVD and Blu-Ray on December 6, 2016.